Well, the landscape of college football has been left in smoldering ruin. Between this insanity and the MLB playoffs, we were treated to one of the most exciting weekends of sports in recent memory, so tip your hat to the Buffalo Wild Wings employee that went rogue and finally hit the big red button.

Week 6 of the 2014 college football season will forever go down as one of the best in the history of the sport, with chaos reigning supreme and ruling with an iron fist. Oregon, Alabama, Oklahoma, Texas A&M and UCLA all went down, marking the first time in history that five of the AP Poll’s top eight teams all lost in the same week. This week had everything a fan could want and more, leaving the race for the College Football Playoff wide open and throwing us into an alternate universe where the Egg Bowl might be as highly anticipated as the Iron Bowl.

So without further adieu, let’s take a look back on the sensational games from a memorable weekend that will, from this point forward, be my evidence for why I’ll take college football over the NFL any day of the week.

Some comments and observations in the aftermath of Wisconsin’s 27-17 victory over Brigham Young University, which improved the Badgers to 7-2 on the 2013 season.

A year ago at this time, everyone was gushing over a certain linebacker, so much so that he nearly won the Heisman Trophy.

I said it then and will say it now: Manti Te’o got plenty of run by simply being the leader of the Notre Dame brand in a year in which the Irish went 12-0 and played in the BCS Championship Game.

He proved to be a solid leader of the Notre Dame team, but got exposed against Alabama, during pre-draft workouts and has not done much so far for the San Diego Chargers.

Anyone who has watched Wisconsin Badgers football this year knows Chris Borland is every bit the linebacker and impact player Te’o was. Borland is an intelligent player and a disruptive force. 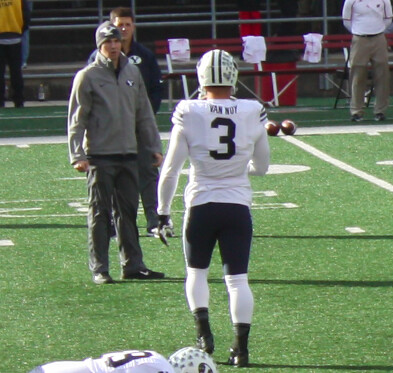 I will give you someone on the other side of the field last Saturday to keep an eye on: linebacker Kyle Van Noy. There seem to be five Van Noys on the BYU defense. There have been games where Van Noy has hit for the “cycle” with a sack, interception , forced fumble, and fumble recovery. And there were a few plays Saturday where Van Noy made an impact.

Obviously, both players are far from the Heisman discussion, though both are in the mix for the Butkus Award and other postseason honors.

Where Van Noy has been noticed is in various mock drafts, where I have seen him listed top 10 overall. Borland however is nowhere to be seen in the first round.

Mock drafts in November and how the actual draft will shake out in May are far different. Opinions change with the All-Star games, combines and Pro Days. But a simple tale of the tape has Van Noy at 6-3 and Borland at 5-11.

If choosing between the two, I might give Van Noy the slightest of edges. But if Borland lasts into the third round, somebody is going to get a hell of a steal.

Can Wisconsin make it to a BCS bowl?

The Badgers’ performance on Saturday does not hurt their chances for a BCS bowl, and the 27-17 final was not as close as the score indicated. The Badgers contained BYU quarterback Taysom Hill (the same man who ran wild on Texas) and dominated on defense to the point that I was wondering why BYU continued to run a no-huddle offense. All it accomplished was Wisconsin dominating time of possession while running back James White (196 yards from scrimmage, three touchdowns) controlled the game.

With Indiana, Minnesota, and Penn State left on the schedule, Wisconsin stands a chance of finishing 10-2, and the blood on the hands of the Pac-12 officiating crew from the Arizona St. loss would loom even larger.

Still, it was a loss, there are no asterisks, but will 10-2 be good enough for Wisconsin?

Barring Ohio State somehow losing twice (and I don’t see it), Wisconsin will not be returning to the Big Ten Championship Game. The Badgers are still getting no love from the BCS standings, as they are ranked No. 22, there are still many of teams to leapfrog to get into consideration. There are in essence four wild card teams in the BCS. Wisconsin likely sits behind the following

I would put the Badgers ahead of any Big XII (Oklahoma) or ACC runner-up, provided Florida State is the champion.

But on the 40th anniversary of the infamous vote deciding whether Ohio State or Michigan would go to the Rose Bowl, I see politics working against the Badgers.

Let’s say Ohio State makes it to No. 2 and plays for the National Championship. The Rose Bowl traditionally rolls with a Big Ten or Pac-12 team to replace a team playing for the national title. For it’s 100th anniversary, would the Rose Bowl go with the Badgers for a fourth straight year? Or would the choice be the Big Ten Championship Game loser?

The Legends Division will almost certainly be decided when Michigan State visits Nebraska Saturday.  Should Nebraska win out, I would think the Rose Bowl would opt for fresh blood and select the Cornhuskers and their rabid fan base for the first time under the traditional New Year’s Day format (Nebraska played in the 2002 Rose Bowl/National Championship against Miami) over Wisconsin.

Or maybe Ohio State wins out, but finishes at No. 3 in the BCS and winds up in Pasadena, freeing the Badgers for another BCS bowl. That would work, and it would actually be refreshing to see Bucky in Miami or New Orleans for a change.

Or if Ohio State, Alabama or Florida St. stumble in their conference championship games and become wild cards, that would bump Wisconsin out of BCS consideration.

I’m going to look at the bright side. If Wisconsin wins out, the very worst fate is the Capital One Bowl. A 10-2 record would be a very good year regardless of bowl, especially considering we know only one loss was legit.

What is up with Wisconsin’s student section? 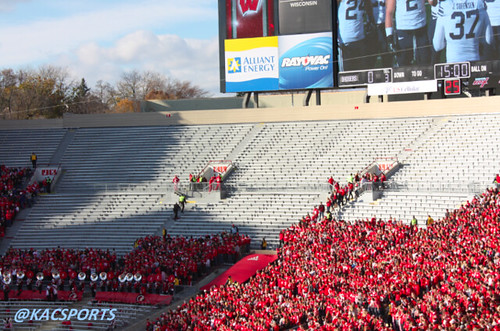 I need someone much closer to the situation to explain this to me. In markets like Nebraska, there are tantrums over seeing any empty seats in the student section. At Wisconsin there are thousands of empty seats at the opening kickoff. Plenty of ushers acting like stewards trying to organize things but no students. That is unacceptable. Wisconsin is supposed to be the best college town in America, seeing the repeated lapse in punctuality contradicts the title.

Many also left early, not long after the traditional playing of “Jump Around.” You could talk about the weather, wind, etc., but remember Nick Saban getting on the Alabama fans a few weeks back? You don’t see the student section leaving en masse at LSU and other venues.

Is it time to cut back on the student allotment of tickets a bit? I’m sure I would catch plenty of heat for suggesting it, but there has to be a way to be there by the opening kickoff.  Is that too much to ask?

I won’t waste much time setting this up, because I don’t want to kill the punchline; you simply have to watch it.