As OTAs are winding down for NFL teams we’re starting to get a better picture of what each roster will look like this fall. With that in mind, here our ranking of the 10 best position groups in the league. Some of them have been helped out by free agency and the draft, while others have been dominant for several years.

It’s not purely a look at the best players in the league, but rather the groupings of players in one aspect of the game that help make their respective teams that much better.

The 2014 NFL Draft is just two weeks away and teams are making their final preparations for the big day. Free agency is largely behind us and squads are basically set heading into the draft.

With that in mind, I’ve compiled the needs of each of the NFL’s 32 teams as we approach the draft.

There have been a ton of reports lately regarding the Philadelphia Eagles and receiver DeSean Jackson. Some say he’s on his way out from the team, while others insist head coach Chip Kelly doesn’t want him traded. The latest suggests there is “no way” Jackson returns to the Eagles in 2014 because of his attitude.

ESPN’s Sal Paolantonio claims that Jackson’s act is wearing thin with Kelly and that the franchise is ready to move on from him. Eagles beat writer Nick Fierro believes Jackson will be gone before the draft rolls around, and people close to the receiver think he’s probably out too.

The problem with moving Jackson is his contract. He signed a five-year, $47 million deal in March of 2012. The contract contains $15 million in guaranteed money, and in 2014 he’s due a hefty base salary of $10.5 million. He’s also set to earn $9.75 million in both 2015 and 2016. If a team is going to trade for Jackson it will most likely demand that he reworks his current deal.

Jackson is a three-time Pro Bowler (2009, 2010, 2013) and put up great numbers during Kelly’s first year in Philadelphia. Clearly the coach’s up-tempo attack agrees with Jackson’s style of play.

While there is no doubt Jackson is talented, he has always had the reputation as a prima donna and while in college at Cal earned the nickname “MeSean” as a result.

All that said, there is no doubt Jackson is a talented receiver who can make plays and help a team. Whichever franchise feels it can rein in his attitude will be the one to jump at acquiring him if the price is right.

As of now, unless there is some kind of major reconciliation, it looks like he won’t be playing in Philadelphia in 2014.

Jaworski had the following to say to Mike Missanelli on 97.5 The Fanatic in Philadelphia about Manziel after he met with the Eagles at the combine:

I’m a big believer in Nick Foles, but who knows? Manziel may fall. I’m not crazy about him, to be honest with you. I’ve only looked at five games. I wouldn’t take him in the first three rounds. That’s my opinion. It’s incomplete right now. But he has not done a whole lot to me.

Jaworski is known for his really strong takes on quarterbacks and frankly, he’s usually right. It’s obviously a big-time stretch to call Manziel a day-three pick, but Jaws is a guy who does his homework and he wouldn’t just toss something like that around without looking into Manziel’s play and personality.

Manziel is currently projected as a top five pick and could be the first guy selected overall in the 2014 NFL Draft. He measured in at just under six-feet tall and weighed in at 207 pounds at the combine, while also clocking times of 4.56 and 4.63 in the 40-yard dash. So it was a bit of a mixed bag from the 2012 Heisman Trophy winner. His size was a disappointment – though no one expected him to come in much taller – and his speed was about what was expected.

Manziel will next be on display in late March at Texas A&M’s Pro Day.

It is time to pick ‘em pal! Four games, four predictions. Time to make up for an awful end of my predicting season, although I went 6-0-1 against the number in college bowl games played on Jan. 1 and 2.

A short number considering Indy won convincingly at Kansas City just two weeks back. No two NFL games are alike, and it would not shock me if Kansas City returned the favor. I had the Colts as my preseason AFC Super Bowl pick, and will stick with them like I did with the fourth-seeded Baltimore Ravens last year. So yes, this will likely mean an eventual Colts win in Denver. ATS PICK: Colts

The weather forecast (mid-20s, little wind) sounds like it will be little factor except for the very real trend that the Saints simply cannot win outside. Still, I have a strange feeling this game could go either way. This will likely be best game of the weekend. ATS PICK: Eagles 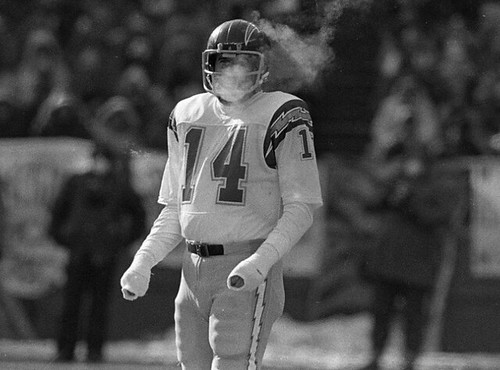 Most of the weather attention will be focused on Lambeau Field, but the Chargers and Bengals have their own iconic Arctic game from January 10, 1982 which featured the obligatory fully shirtless fan on top of one of the Riverfront Stadium dugouts. Similar brutal cold is due to hit Cincinnati on Sunday, but not until nightfall. Still, conditions will not be ideal for the 1 p.m. ET start either. One to three inches of snow is expected to fall during the day. ATS PICK: Chargers

The latest forecast model has the game-time temperature at minus-4, dropping to minus-7 by the end of the game. Wind will be a factor with a wind chill hovering around minus-30. The other back story is how the 49ers have owned the Packers recently. San Francisco has developed a strong organization from the top down to the scouting department including Bob Morris and others. I am having a hard time deciding which way to go in this one. ATS PICK: Packers