Barring a home playoff game, one of the NFL’s more venerable venues closed its doors Monday night with the final regular season game at Candlestick Park.

A much maligned venue (especially for the baseball Giants) over its history, Candlestick has staged some of pro football’s most memorable games over it’s 53-year history.

Here is my list of the top 10 football games in the venue’s history. A 49ers win is not a prerequisite to making the list.

San Francisco opened the 1998 season going to overtime against the New York Jets. In the extra frame, the Niners were pinned on their own four-yard line when the ball was handed off to Garrison Hearst, a former top draft pick who had crashed out in Arizona and Cincinnati. Ninety-six yards later Hearst was in the end zone with one of the most dramatic walk-off touchdowns in NFL history. He would go on to rush for 1,507 yards that year.

For years, Jim Brown’s 126 career touchdowns was the benchmark for career scoring, that was until Jerry Rice scored three times in a season-opening blowout on Monday Night football to eclipse the mark in 1994.

Rice still had another 10 years of football left in him. He finished his career with 208 regular season touchdowns. 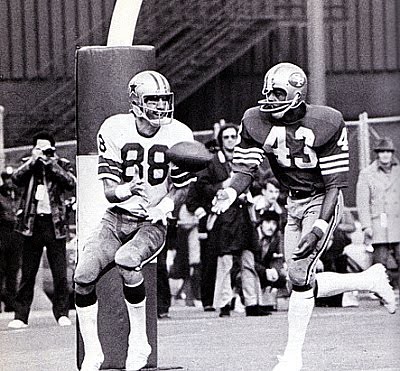 Dec. 23, 1972 is still known as Black Sunday in the Bay Area, most notably for the Immaculate Reception that eliminated the Oakland Raiders earlier in the day. The home loss by the 49ers to the Cowboys was just as devastating.

Roger Staubach replaced Craig Morton during the second half of a divisional playoff game and ended up leading Dallas to 17 points in the waning minutes for a 30-28 win, leaving Cowboys players literally rolling on the artificial turf in front of coach Tom Landry in celebration.

This is the first of three Giants/49ers games on the list. This is unfairly best remembered for Kyle Williams’ two fumbles that cost San Francisco the game. In defeat, Jim Harbaugh’s squad proved they were back for real. Vernon Davis caught touchdown passes of 73 and 28 yards in the 20-17 overtime loss. The Giants went on to defeat the Patriots in Super Bowl XLVI.

Just in under the wire. The probable final 49ers game at “the Stick” could not have been scripted any better. Atlanta had just scored and was able to kick off from midfield. The Falcons executed a perfect onside kick and were prepared to spoil the farewell party. Then NaVorro Bowman happened. Bowman’s improbably 89-yard interception return for a touchdown sealed a 34-24 win and sent Candlestick out in style. It is still possible for the Niners to win the NFC West and earn a home playoff game, but maybe it is best the team plays on the road this postseason. Monday night was a perfect ending for the stadium.

“Everything hurts.” That was Joe Montana speaking to the medical staff after being blasted by the Giants’ defense, as was also the case four years earlier in a crushing loss at the Meadowlands. Matt Barr’s fifth field goal gave the Giants a 15-13 win, ending San Francisco’s bid of a third straight Super Bowl title and setting the stage for the Giants’ dramatic Super Bowl XXV win over the Buffalo Bills.

During the regular season, the 49ers beat the Giants in a 7-3 slugfest in what was a highly anticipated Monday Night game. The Giants got payback when it mattered though.

The second-greatest comeback in postseason history. Midway through the third quarter the Giants held what appeared to be an insurmountable 38-14 lead. That was before Jeff Garcia and Terrell Owens rallied the Niners to a late 39-38 lead. As darkness descended upon the Stick, the Giants moved into field goal range. But as Matt Bryant was set to attempt the game-winning 46-yard attempt, things went horribly wrong. A botched snap foiled the field goal attempt and holder Matt Allen decided to just hurl the ball down field in the direction of guard Rich Seubert. Seubert was essentially tackled during his attempted reception but no call was made, as the officials ruled that Seubert was an ineligible receiver and the 49ers won.

Jerry Rice fumbled. It was that event that eventually got the competition committee to adopt instant replay for good. It was also a game where Terrell Owens was dropping everything in sight. That was before the Packers inexplicably allowed T.O. to catch a 25-yard pass with three seconds remaining, to give the 49ers a 30-27 win. Garrison Hearst also played admirably that day despite a hamstring problem. Hearst would make it to the gate the next week for a divisional playoff in Atlanta, but suffered a devastating ankle injury on his first carry which ended up shelving him until 2001.

After a long playoff drought, the painted end zones and red trim on the yard markers made a return to Candlestick, signaling postseason football. The lead changed four times in the final four minutes of this game. Darren Sproles sprinted 44 yards with a Drew Brees pass for a touchdown with 4:02 to go. Then Alex Smith ran 28 yards for a score with 2:11 to go, before Jimmy Graham hauled in a 66-yard touchdown with 1:37 left.

Then, finally, Vernon Davis hauled in a 14-yard touchdown pass with nine seconds remaining to clinch a wild 36-32 game. This game immediately became an instant classic.

The Catch. “Candlestick has gone bananas.” A much younger Chris Berman getting video-bombed by a hippie in a postgame remote shot. This was the day a dynasty began for Joe Montana, Ronnie Lott and coach Bill Walsh. A frigid nation watched as the Niners went toe-to-toe against the heavyweight Cowboys.

What many forget is that after “The Catch,” Danny White was rallying the Cowboys into field goal position before a strip sack/fumble provided the final dagger. This game also belongs in the discussion of best NFL game of all-time.

I left a lot on a cutting room floor, feel free to comment below.