As a tribute to our faithful MidwestSportsFans readers and blog posters, I am happy to announce our new roundtable discussion: The Fire and Ice Midwest Sports Forum. Our writers and editor are from different areas of the Midwest and have different views and thoughts each week into the sports world.

The Fire and Ice Midwest Sports Forum will allow us to express to our readers our thoughts on hot topics each week. Additionally, we encourage you to use the comments section to vote Fire or Ice for any of the subjects that you have a strong opinion on.

If you would like to see something added to the next week’s edition of Fire and Ice, email me at [email protected]

This week’s targets are;

END_OF_DOCUMENT_TOKEN_TO_BE_REPLACED

(Update: It appears that Tony Romo will not start today, so the advice below regarding Brad Johnson is relevant.Â  Romo is expected to play only if things “go haywire.”)

(Editor’s Note: This story was written and published before reports began to surface that Tony “I Want to Be Brett Favre” Romo began saying that he wanted to ignore the advice of the Cowboys’ training staff (per 1310 AM The Ticket in Dallas this morning) and play with his injured pinkie this weekend against St. Louis. Obviously, if Tony Romo plays it puts Brad Johnson on the bench. Still, the advice below is worthy of heeding, as Romo could still decide to sit out and is very much at risk of doing further damage to his pinkie should he decide to suit up. This is a situation to monitor as Sunday approaches, and certainly Brad Johnson should be on your radar screen until we hear that Tony Romo has a clean bill of health.)

It’s crunch time fantasy football owners — you know what I am talking about. We are in the meat and potatoes of the season. Week 7 marks the first game over the halfway point to the playoffs. Visit the link to my week 6 results and see why I should be your weekly source for all of your NFL needs and advice.

First, I would like to thank those who wrote into me this week at [email protected] with their fantasy football questions. This week’s selected question came from Eric in Cleveland.

Eric has both David Garrard and Matt Ryan on byes and needs to pick up a QB. Eric has five options to start at QB that are available on waivers and wants to know who will be the most successful. His options are Matt Cassell, Brad Johnson, Dan Orlovsky, Charlie Frye and Seneca Wallace.

END_OF_DOCUMENT_TOKEN_TO_BE_REPLACED

Tony Romo — DONE. Tony Romo is out four weeks with a broken pinky finger. Grab Brad Johnson, who will fill in for Tony Romo, if you can for several reasons. Brad will produce numbers, not Tony Romo numbers, but numbers none the less. The run game that Dallas will now have to rely upon without Tony Romo will open up the pass game. Not deep balls, but consistent numbers, and passes to two very talented backs who can break a two yard pass for an enormous touchdown.

I expect Brad Johnson to average a little over 200 yards passing with 2 touchdowns and a pick or two a game. If you don’t need him, pick him up to screw Tony Romo owners or other teams weak at the QB Position. Johnson could provide a decent return in a trade.

END_OF_DOCUMENT_TOKEN_TO_BE_REPLACED

[Admin Note: This will be the first post in a new weekly feature here at Midwest Sports Fans as we expand our coverage of fantasy sports. Kurt Fraschetti is a regular contributor to Midwest Sports Fans on Cleveland sports topics, and will also be authoring the new weekly Fantasy Football Focus. In addition to his work on our site, Kurt is a professional fantasy and odds analyst at ProFootballInsight.]

Welcome to the new weekly posting of the Fantasy Football Focus, brought to you by the professionals at ProFootballInsight. If you have any questions leading into the upcoming week and wish for them to be 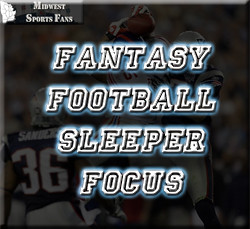 answered on our weekly Fantasy Sleeper Focus column, please email us early in the upcoming week to profootballinsig[email protected]. Your questions to be answered and posted for that week.

If your league is deep, that being 12-plus teams, and you are looking for options that could or should still be on waivers, well look no further. Leading into Week 6, we at ProFootballInsight.webs.com like the following sleeper options:

END_OF_DOCUMENT_TOKEN_TO_BE_REPLACED

From pick #199 in the 2000 draft to 4 Pro Bowl appearances and 3 Super Bowl victories in a 4 year span, New Englandâ€™s Golden Boy Tom Brady has surmounted an elongated path to become arguably the most dominant QB of the modern NFL era. Since 2002 Bradyâ€™s seasonal stats have flirted with excellence; Throwing 23+ touchdowns, Avg. QB Rating of 85+, and over 3500 Pass Yards. Not to mention his Single-Season record of 50 TDs in the 2007 season with almost half of those delicacies belonging to newcomer Randy Moss. And why not throw in that his 4,806 Passing Yards were the 3rd best of all time for a QB. Peyton who?

So why ramble on about a player whose top tier performances hardly need any more textual recognition? One word: history.