The first College Football Playoff rankings came out this week and, well, there weren’t any Big Ten teams in the top four. If you find that news surprising, let me also break it you that the stuff in the middle of a Twinkie isn’t actually whipped cream, either. For the rest of us, there are six games that need our attention, so let’s give it to them, shall we?

This week’s Big Ten football schedule features two of the longest roads trips possible for conference teams — and the absolute shortest. No doubt some of these teams will be wishing they’d just stayed home. But who? And why? Well, that’s why I wrote the article, so go read it.

I could write something snarky about Michigan, Brady Hoke, and/or Dave Brandon, but I don’t like to do what everyone else does. Besides, we all know there’s a huge game this week, one with potential national playoff implications, so why spend time discussing some school’s problems? Let’s get right to that huge game, my prediction is right there on the next page!

I don’t know if you noticed, but the Big Ten lost a few important non-conference games last week. In this week’s Big Ten football picks I’ll be looking at each team, evaluating what’s working and what clearly isn’t. Well, as clearly as anything can be evaluated after just two weeks. To the games!

In 1985, the Nebraska Cornhuskers scheduled Florida State to open the season and lost. It marks the last time NU last a season opener, their ongoing 28-game streak continues to rank as the nation’s longest.

However, hanging on to a 37-34 win over the University of Wyoming this past Saturday goes down as the closest call since. 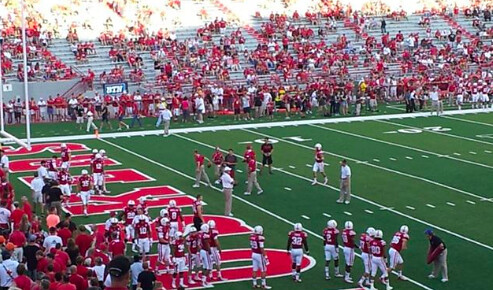 During the second half of Saturday’s game, the Huskers were not in real danger of losing. But Wyoming scored two late touchdowns after some of the record crowd of 91,185 had left Memorial Stadium, and got the ball back for one final drive with just over a minute remaining. The Blackshirts finally showed some semblance of living up to the defense’s legendary nickname, and secured the win in a game where the people in Vegas had Nebraska winning by 28.

Is this cause for alarm for Great Big Red – one of the most feared programs in the land dating back to the days where Chris Schenkel and Keith Jackson were in the broadcast booth?

The last time Wyoming visited Nebraska was in 1994, and surprisingly the scoreline was similar, the game was up for grabs until the Huskers secured a 42-32 win.

The difference in 1994 was the Wyoming-Nebraska matchup was game number five. The Huskers had already routed a pair of top-25 teams and would go on to a 13-0 record and a National Championship.

But a close shave in Week 1 is cause for “Code Red” in these parts, especially when looking at game stats.

The preseason came with enormous expectations, and the pre-game featured the stadium video showing Kenny Bell’s devastating block on Wisconsin’s Devin Smith which this year would likely include an ejection along with a 15-yard penalty. What was the final score of that game anyways? Something like 70-31?

Saturday night, the Huskers’ defense picked up right where it left off in the final two games of 2012, giving up 600 total yards and an alarming 35 first downs (an all-time team record). Wyoming quarterback Brett Smith threw for 383 yards, and ran for 92 more. A local beat writer said the Nebraska coaching staff was well aware of Smith’s talents during the week, likening him to a young Brett Favre.

Fortunately, the offense more than held up its end of the bargain. The road-graders up front did their jobs like the days of yore with the team racking up 375 yards on the ground. Outlining a muggy late-summer night, quarterback Taylor Martinez, running backs Ameer Abdullah, Imani Cross and true freshman Terrell Newby played the roles of the Four Horseman, all eclipsing 75 yards rushing. Cross scored twice, including a highlight-reel run where he hit the spin button twice en route to the end zone. At the time it gave the Huskers a 24-14 advantage and much needed separation. The bad side of Cross’s night was a late-game brain cramp in which he ran out of bounds, allowing Wyoming to keep a time out before its final drive.

The passing game did not do much, but Taylor Martinez did finish 17-of-22 with three touchdown passes, including nice touchdown receptions by Jamal Turner and Quincy Enunwa (overturned for a score by instant replay). Between Bell, Turner, and Enumwa, the Huskers are deep in receiving talent. I also look for Kenny Turner to take a kickoff return or two to the house before the year is out. 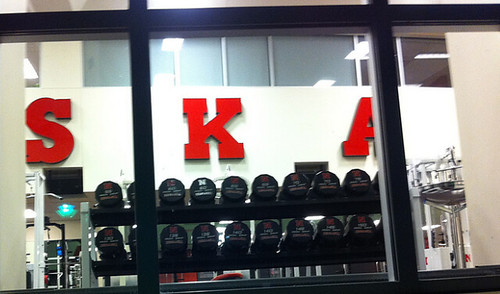 In a game featuring 1,132 total yards, the visitors from the high country out-gained Nebraska, and the mood of many fans leaving the stadium was not good. Wyoming was also ultra-conservative late in the first half, running out the clock at midfield. Not taking a shot at an extra three points proved to be a difference-maker considering the final margin.

On a weekend that saw no less than six programs lose at home to FCS competition (including defending Big 12 Champ Kansas State), it was a reminder that not too many automatic early-season wins exist these days. I expect the Huskers to lose a couple of spots in the polls before hosting what has become a horrible Southern Mississippi program next Saturday.

The early-season hurdle looming is a UCLA squad that dropped 58 points on Nevada opening weekend. That game will go a long way to determining whether the Huskers will go deep into season as contenders, or if they are a team destined for the Wild Wings Bowl – where the rewards are a few free meals and a $500 gift card.

I say the defense needs to hit the weights this week.