Who has got a man cave and is planning on watching all 35 NCAA bowl games over the next fortnight?

That is nearly 140 hours for your viewing pleasure, although fans are going to have to rough it through Christmas Day and make do with 13 hours of NBA basketball instead.

You will be tuned in, admit it. And next year there will be even more postseason games, including one in Atlantis and another at the Miami Marlins stadium, which is the original Orange Bowl site. Here is a great question: why didn’t they just build another football stadium there?

But here are my bowl season Against the Spread picks.

Not a bad pairing for one of the bottom-feeding bowl games. Mike Leach will have his WAZZU team ready by spending hours on tales regarding the mystical state of New Mexico, including whatever crashed at Roswell in 1947. The alien Old Spice ad that ran this year is definitely based on one of Leach’s pep talks. ATS PICK: Washington St.

One of my easier bowl picks of last year was picking against USC, and as expected they looked like a team wishing to be anywhere other than El Paso, Texas.

Will Tommy Trojan be more motivated this year? Maybe, but so will Fresno quarterback Derek Carr, who is looking to solidify his status as an early first-round pick like his big brother was a decade ago. Sibling rivalries and Vegas distractions will be a factor here. ATS PICK: Fresno St. 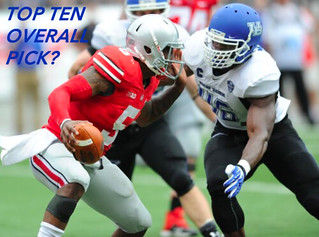 Somebody projected the attendance to be somewhere around 4,300. Come on, man. Game time temperature is forecast to be in the 30s with some lingering snow showers around. Perfect football weather.

There are reasons to watch. Buffalo linebacker Khahil Mack comes complete with his “look at me” facemask and has been very high on draft boards since recording 2.5 sacks and a score in the Bulls loss at Ohio State in the season opener.

San Diego State junior running back Adam Muema jumped the gun by announcing on Twitter that he was declaring for the NFL Draft earlier in the week. Muema quickly deleted his tweet, but will likely make it official by the time SDSU leaves Boise. Ronnie Hillman left school early two years ago and wound up being selected third round. ATS PICK: Buffalo

The Beavers needed a miracle to get out of San Diego State with a win early in the year. That is enough to sway me against OSU, even though Boise will be with an interim coach with Chris Petersen departed. ATS PICK: Boise St.

It has become tradition in the MAC, the winning coach of the conference championship immediately bolts for “greener” (pun) pastures. Bowling Green coach Dave Clawson immediately left for Wake Forest, taking both of his coordinators with him. Eastern Illinois coach Dino Babers has been named as a replacement. ATS PICK: Bowling Green

The Holiday Bowl’s offshoot has been putting out some pretty good matchups in recent years. NIU’s season ended on a downer, but expect Jordan Lynch to put on a show in his final game. ATS PICK: Northern Illinois

In their final game before joining the Big Ten, the Terps stay close to home in Annapolis. ATS PICK: Maryland

Returning to the Texas Bowl for a second straight year, the Gophers are still smarting in failing to get the Paul Bunyan axe from Wisconsin for a 10th straight year. As the Badgers prepared to chop down the second goalpost, players and school officials stepped in, with one state militia member getting in the face of Wisconsin head coach Gary Andersen. ATS PICK: Minnesota

One memorable meeting between the schools was 2008, when U-Dub lost after Jake Locker threw the ball up in the air after scoring on the last play of regulation, leading to a blocked 35-yard extra point. In the days that followed Dan Wetzel insanely trumpeted BYU as a BCS title game contender while the Huskies would go on to finish 0-12.

One of the interesting dynamics has Marques Tuiasosopo serving as the Huskies caretaker coach for this game.

Two local favorites playing in New York. Rutgers couldn’t even tread water in the AAC, but I think the spread is a little too hefty for a bowl game. ATS PICK: Rutgers

With Bearcats quarterback Brendon Kay in the house, I’m shocked a jewelry store hasn’t picked up sponsorship of this contest. UNC’s season was highlighted by another ridiculous post-game incident where they danced on a midfield logo N.C. State designed that was a knockoff from East Carolina. ATS PICK: Cincinnati

The two schools become ACC rivals starting next year. This is one of Teddy Bridgewater’s final arguments for being the first overall pick in the 2014 NFL Draft. It could also be head coach Charlie Strong’s final game if he is offered the University of Texas job. ATS PICK: Louisville (LOCK)

Devin Gardner has been in a walking boot since playing courageously in the Wolverines one-point loss to Ohio State. That is enough evidence to go with K-State to win the Wild Wings Bowl. ATS PICK: Kansas State

This will be a 10:45 a.m. local start in Fort Worth. Look for the Middies to pick up where they left off in the snow in Philadelphia. ATS PICK: Navy

Despite being a slight underdog, 66 percent of voters on Yahoo! have the Yellow Jackets winning. ATS PICK: Georgia Tech

Oregon already has it’s first win for 2014 with Marcus Mariota returning for his senior season. The money line has the Ducks at -500, but would you doubt Mack Brown winning his last game close to home? ATS PICK: Texas (LOCK)

This is the most anticipated matchup between running backs of the bowl season with Arizona’s Ka’Deem Carey squaring off against BC’s Andre Williams. ATS PICK: Arizona

I don’t pick Virginia Tech against the number, ever. Outside linebacker Anthony Barr and quarterback Brett Hundley will be among those looking to improve their draft standings in this game. ATS PICK: UCLA

About same bat time, same bat channel, as when these two programs played a year ago. UGA is laying too many points for me, Nebraska players continue to stand behind coach Bo Pelini and I see the Huskers winning outright. ATS PICK: Nebraska

This game will come in all its standard definition glory on ESPNU, at least if you are a Dish customer. ATS PICK: North Texas

I have a bad feeling about this for Bucky. Look for Jadeveon Clowney to emerge from his partially self-inflicted in-season hibernation to re-establish himself as one of the top overall picks of the 2014 NFL Draft. ATS PICK: South Carolina (LOCK)

LSU will be trotting out its second-string quarterback. That will still be far better than Iowa’s current quarterback situation. ATS PICK: LSU

The Rose Bowl has done very well for its 100th edition, landing the fourth and fifth ranked teams in the nation. Obviously two of the three teams ranked ahead of the Cardinal and Spartans will also be in Pasadena. ATS PICK: Michigan St.

Do not sleep on the UCF Knights. Quarterback Blake Bortles is working his way into the crowded first round consideration if he chooses to declare for the NFL Draft. ATS PICK: Central Florida

This will look like a spring game considering the color schemes of the two schools. This reminds me of when Alabama was disappointed to miss out on the BCS title game a few years back, then got slammed by Utah in a flat performance. The laugh right now is on safety Ha Ha Clinton Dix, whose draft stock has slipped. ATS PICK: Oklahoma

This just feels like a BCS game, and also an old Big XII game. The first team to about 35 wins. ATS PICK: Oklahoma St.

The last time these two programs met on the gridiron, this happened. I don’t think Coach Woody was clued in at the time that his freshman quarterback may have had some action on the opposition. ATS PICK: Clemson

All bets would be off if Vandy coach James Franklin were offered the Texas job. ATS PICK: Houston

The most suspense will be what type of ridiculous get-ups Adidas will have prepared for Ball St. ATS PICK: Ball St.

FSU laying nine on a SEC team in the National Championship. Maybe the Seminoles do win it all, or maybe Jameis Winston suffers a Heisman hangover. ATS PICK: Auburn (LOCK)