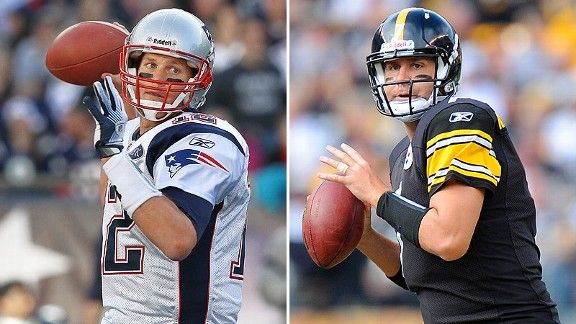 In an entertaining game Sunday afternoon, Tom Brady led the New England Patriots to a 55-31 victory over the Pittsburgh Steelers. Brady did it with the help of receivers Danny Amendola and Aaron Dobson, and also got a boost from the return of tight end Rob Gronkowski.

The game got off to a crazy start midway into the first quarter after the Patriots had a run play on fourth and one from inside the one-yard-line called a touchdown, then reversed on replay. Thanks to an offsides call on Troy Polamalu, New England had another crack at fourth and one. On the ensuing play, the Steelers stuffed running back Stevan Ridley and took possession. The score remained 0-0.

Then, the Patriots would go on to almost set their franchise record for most points in a game.

The Steelers made things interesting in the third quarter by tying the game at 24 after trailing 24-10 at the half. But Brady and company then turned on the gas and the veteran quarterback ended up throwing for for 432 yards and four touchdowns, with no interceptions.

It is rare for quarterbacks who have won multiple Super Bowls to face off in the NFL (I’ve written about this topic before). The Roethlisberger versus Brady match up as multiple winning Super Bowl quarterbacks is the most in NFL history. Although, if Peyton Manning was to win another Super Bowl, the Brady versus Manning match up would be more historic.

Tom Brady has matched up against Roethlisberger six times during the regular season.

Interestingly, every time they have played against each other in the regular season, one of those teams has gone on to the Super Bowl.

In 2004, Roethlisberger’s rookie season, the teams met twice, once in the regular season, won by the Steelers. In the AFC Championship game, which the Patriots won, they played their only matchup in the playoffs so far. The Patriots went on to win their second consecutive Super Bowl (the last NFL team to win back-to-back titles) over the Philadelphia Eagles.

In 2005, the Patriots beat the Steelers in the regular season, but the Steelers went on to win a controversial victory (referees had thrown questionable flags repeatedly in favor of the Steelers) over the Seattle Seahawks in the Super Bowl.

In 2007, in a perfect regular season, the Patriots dispatched the Steelers in one of their 16 victories. They ended up losing out on matching the 1972 Miami Dolphins as the New York Giants pulled off the surprise win in Super Bowl XLII.

In 2010, the Patriots won the regular season game, but the Steelers were the ones who went to the Super Bowl, losing to the Green Bay Packers.

In 2011, the Steelers won the regular season matchup, but the Patriots ended up going to the Super Bowl, again losing to the New York Giants.

In addition to those matchups, the Steelers beat a Patriots team led by Matt Cassel in 2008. The Steelers won the Super Bowl that year against the Arizona Cardinals.

Does the win Sunday mean the Patriots are going to this season’s Super Bowl?