With my 32-team Ultimate Franchise Player series now finally over, it is now time for the hard-core bracketology. After much deliberation and shuffling, here is my final 64-player field – including my 32 at-large selections..

For an explanation of Kurt Allen’s methodology for choosing each franchise’s ultimate franchise player, and then how you and he will choose the NFL’s Ultimate Franchise Player from that list, click here. 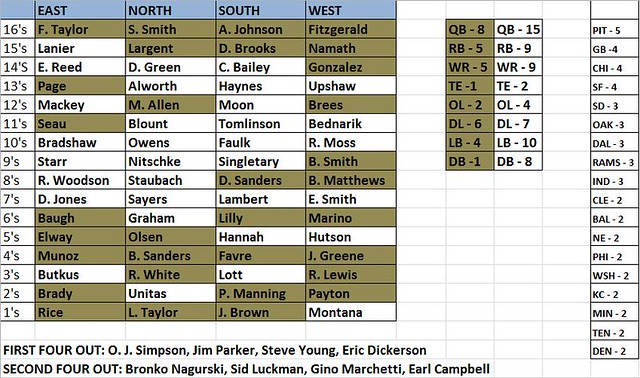 Time for some explanations. Players listed in gold earned the automatic bids as their franchise’s All-Time Ultimate Franchise Players – those listed in white are the at-large entrants.

To the right of my grid, you can see the distribution by position, first among the automatic selections, and then overall. To the right of that you see the 18 franchises who have multiple selections in the field, those not listed are the teams with one player each in the field.

Now for the breakdowns.

With only 64 spots, it takes much more than a yellow jacket from Canton to make the cut, especially as an at-large entrant. Even if I were to expand the field to 128 I would still be leaving a lot of all-time greats out.

As an at-large, it would take an RPI number of about 50 or lower to realistically make the list. As is the case with the NCAA Tournament, the 15th and 16th seeds comprise of players who would not be on the list if they had not been given the crown as their team’s UFP. Three of the 15 seeds would rank as borderline top-100 players, while the 16s are ranked between 230 and 300 per Pro Football Reference.

As might be expected, quarterbacks have by far the greatest representation. They comprise nearly 25 percent of the field, got eight of the automatic bids and there are 15 players from the position overall. Nineteen of the overall bids and 35 total players come from skill positions. In all, 39 players are on offense, 25 come from the defensive side of the ball.

Only one defensive back was selected out of my original 32 team UFP bids. I tried to make up for that with seven at-large selections out of the secondary.

Forty-seven players in the field are already enshrined in the Pro Football Hall of Fame. Ten players in the field remain active at this moment – a list that include No. 2 seeds Peyton Manning and Tom Brady, No. 10 seed Randy Moss, No. 12 seed Drew Brees, and No. 14 seeds Tony Gonzalez, Ed Reed, and Champ Bailey. The Hall of Fame chances of even the three 14s are very favorable.

The remaining seven recently retired and in most cases will not be waiting long to get the call from the Hall. Derrick Brooks becomes eligible in 2014, Junior Seau in 2015, Brett Favre and Terrell Owens (barring a comeback attempt) would be eligible in 2016, LaDainian Tomlinson in 2017, Ray Lewis in 2018.

Not surprisingly, the only four not ensured of enshrinement in Canton are our 16 seeds. Per the current Pro Football Reference Fan rankings, Larry Fitzgerald currently sits at No. 217, Andre Johnson No. 231 and Steve Smith is at No. 277. In recent days Fitzgerald and Johnson have been trending upward in those rankings, while Steve Smith has been falling. If any of the three were to retire now they would be firmly on the Hall bubble, but with the entire body of work not complete, there is still time for the three wideouts to enhance their credentials.

Years from now, the 64th player in the field may end up as the lone player not in the Hall – Fred Taylor is already in the clubhouse and his Pro Football Refrerence RPI is sitting at No. 278. As of now Taylor is on the dark side of questionable, and his best chance of getting a Hall pass may be with the veterans’ committee far off in the future.

MORE ON THE FIELD

The premise of seeding this field is similar to what you see in March Madness. Some players are over-seeded or under-seeded. One of my first criteria was to make sure two players from the same position do not face off in the first round. I just feel players from different positions, and different eras, makes the process more entertaining.

Looking at each of the 32 franchises as its own “conference,” I decided on a cap of four players for each team – but I did make an exception in regards to the Steelers, from whom I tapped five players. For those teams with multiple representatives, I spread them out amongst different regionals. So with the exception of two Steelers possibly meeting in the Elite Eight, a matchup between icons from the same club cannot happen until the Final Four.

Shockingly, the New York Giants only have No. 1 seed Lawrence Taylor in the field. That was a no-brainer. While LT is ranked third on the NFL Top 100 list, the next Giants on that list are Emlen Tunnell at No. 79,  Sam Huff at No. 93, Mel Hein at No. 96, and Michael Strahan at No. 99.

On a final note, for purposes of this list, here are the teams I have players who played for multiple teams representing them:

To be honest, Haynes’ career is so split equally between the Patriots and Raiders that you could have him representing either, or just consider the Raiders and Pats as having two-and-a-half players each.

On my first four, and second four, who fell just short of making the illustrious field, O.J. Simpson remains the elephant in the room. For the rest of my selections, off-field escapades did not factor into the equation. In fact, that is what I like about the Pro Football Hall of Fame, those deserving of entrance are considering on talent alone. That stands in contrast to the Baseball Hall of Fame at Cooperstown, where the baseball writers pretend that guys like Pete Rose, Shoeless Joe Jackson never existed for various reasons.

In actuality, Simpson is probably a No. 9 or No. 10 seed. Is his body of work better than Willie Lanier or Champ Bailey? Probably. I remember Juice tearing it up in the middle of the 1970s like few backs since. But my final decision was to leave him out of the field.

You could argue that I am starting a slippery slope here, that perhaps I should also omit Ray Lewis. Well, my slope stops with Simpson. Lewis is a top-15 all-time player in my opinion and the evidence in the court of public opinion with Ray is not as damning as it is with Simpson.

Now for the other snubs:

Jim Parker and Gino Marchetti – I am guilty of omitting a lot of the old-timers from the field of 64. I gave Sammy Baugh and Don Hutson their due from the 1940s. NFL Films in fact declared Hutson as the best Green Bay Packer of all time, which was done just to spark argument. Hutson’s total body of work does not nearly compare with Brett Favre’s.

I also have Otto Graham, Jim Brown and Chuck Bednarik out the 1950s.

On the NFL All-Time Top 100 list, Parker is No. 32 while Marchetti checks in at No. 39. Both are very deserving, unfortunately, a lot of greats had to be left out and I kind of treated the old-timers like the NCAA treats mid-majors who did not win their conference tournament. I also decided three Colts were enough in the field.

Steve Young – No one is as big a fan of Steve Young as myself. Two factors work against him however: I was pretty well capped with four Niners in the field (Montana, Rice, Lott and Owens), and also Young’s No. 81 RPI (according to the NFL Top 100) is a little too low. 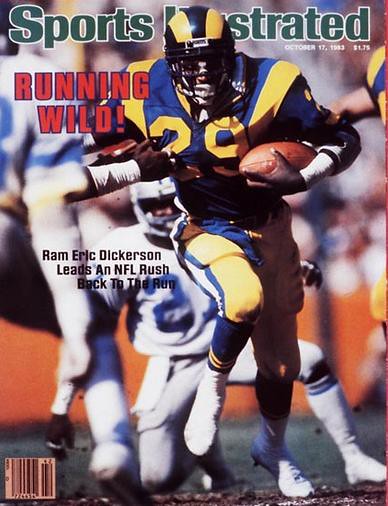 Eric Dickerson – This was the toughest omission of all. Dickerson is No. 52 on the NFL Top 100, while Willie Lanier (my last at-large to make it) is ranked 53rd. Dickerson is also far more popular with the fans, ranked 28th in the NFL’s fan vote and currently 35th on Pro Football Reference.

The reason for picking Lanier over Dickerson is as follows: Willie was absolutely stellar as a Pro Bowl linebacker eight consecutive seasons. Dickerson had some historic years early on (leading the league in yards from scrimmage four times), but he faded somewhat second half in his career, and only made the Pro Bowl five times.

I also considered Dickerson over defensive backs Ed Reed, Darrell Green and Champ Bailey. In the end I couldn’t put him in over any of the three. Bailey is an 11-time Pro Bowler, Reed has made the Pro Bowl nine times in the last decade, and I can’t go against Darrell Green’s 20-year resume.

Eric Dickerson is my unfortunate first player out.

Bronko Nagurski and Sid Luckman – I decided against putting a fifth Bear or Packer in the field. I would like to focus on Nagurski, who at No. 19 is the highest ranking omission off the NFL Top 100 list. I’m sure he dominated the 1930s – there just is not a lot of video evidence from that time period.  Furthermore, how would Nagurski compare with a lot of the greats of the past two or three generations? He was a legendary athlete by all accounts, I’m just not convinced he is good enough to make this field as an at-large.

Same goes with Jim Thorpe, who ranked 37th in the NFL countdown. He is certainly on the short list as among the best athletes from the last 120 years or so, but as a pro football player his career basically consisted of barnstorming with a number of teams when the NFL was in it’s infancy. He is one of the pioneers of the game but he came so long ago that he didn’t get to complete against on a weekly basis during his career. Red Grange (48th on NFL list) is also in the same boat, he made an impact barnstorming when he turned pro after his college career ended, but did not have an extended career in the league.

Earl Campbell – I’m such a big Campbell fan that I originally had him in the field. But after taking a closer look at the numbers I realized that he was not elite for long enough. His first four years were spectacular, but he simply burnt out too quickly. Over an entire career he actually falls short of Eric Dickerson.

So there it is, I’m sure there are a few dozen others that can be argued onto this list, and that’s what the comments section below is for.

In the next few days we will start going over the brackets for the Ultimate Franchise Player tourney and continue our quest for the greatest pro football player ever.

Because I’m a giant dork, this is my favorite image from NFL Week 13: when Broncos wide receiver Matt Willis was photographed standing next to running back Willis McGahee.