For the past two weeks, headline editors and everyone else (including us here at MSF) have been looking for the next clever pun to describe sudden New York Knicks star Jeremy Lin…

‘Cashing (L)in’ (CBS Sports’ fantasy session suggesting that if you picked up Lin, this would be a good time to trade before his statistical role is somewhat reduced and the hype fizzles some…)

Unfortunately, we can now include ‘Lin-sensitivity’ to the mix…

It started a week ago – while Lin was torching Kobe Bryant and the Lakers – with Jason Whitlock on Twitter, who suggested that a ‘lucky lady’ in New York was going to feel  ‘a couple inches of pain’.  Of course, this was just an example of Jason Whitlock’s typical edgy, controversial persona in which he thrives on.

Whitlock later made a statement of apology (noting that he still wishes to be a ‘standup comedian’  and references Richard Pryor), and in a subsequent piece for Fox Sports, Whitlock notes that he praised Jeremy Lin in previous tweets that night and goes on to make the 9000th comparison between Lin and Tim Tebow.

Then came this past Friday night, when Lin finally showed he was human (nine turnovers), and the New York Knicks actually lost a game.

Over the weekend, the HR Department at the Worldwide Leader in Sports has been frantically busy adding to their disciplinary files.

First came the ‘Chink in the Armor’ headline that appeared for 35 minutes on the ESPN Mobile site in the middle of the night, which was quickly removed, but not before plenty of screen-shots were made. ESPN later announced an apology, and then later in the weekend announced that the writer who penned the headline had in fact been fired.

But that’s not all.

Earlier in the week, while doing a phone interview with Knicks legend Walt Frazier, ESPN anchor Max Bretos uses THE VERY EXACT SAME WORDS. Bretos, who also hosts a daily MMA program for the WWL, has now been suspended 30 days, which he might spend updating his resume.

BTW: the reason heads roll at ESPN while nothing happens at FOX?? Because FOX knows exactly what they signed up for with Jason Whitlock; there is little shock factor left on anything he says.

Meanwhile, there is a third, much more notable potential casualty who also said these VERY SAME four fateful words…

I got note on one of my Facebook feeds Friday night (and confirmed by another Facebook user) that the words – “chink in the armor” – were used on the Knicks radio broadcast at the end of Friday night’s game. Since, I have been wondering why the ESPN Mobile headline was getting scrutiny, and not this… (audio). 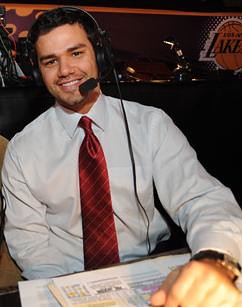 It was indeed Spero Dedes on the Knicks Radio Network. To show how far I’ve been out of touch with NBA broadcasters the past few months, I thought that Spero was still working for the Los Angeles Lakers. Turns out that Spero (who had done Lakers radio the past six years) turned down an offer to become the Lakers TV voice and signed on with the Knicks – which would make sense since Dedes is originally from the New York area.

Besides landing the job with the Knicks, it had already not been a good year for Dedes. Not long after his hiring he was pulled over and busted in a DUI case. Spero has been considered a rising star in the sports broadcasting industry for quite some time. Besides his NBA work, Dedes has also been with the NFL Network and also for CBS Sports in NFL and March Madness telecasts.

If anyone in the media is good enough, they can get away with a legal rap such as a DUI. There is also another legendary announcer, who just also happened to be a Knicks PBP man in the day, who eventually got his old jobs back after some time in purgatory after much more damning charges.

But saying something racial (even unintentionally, as seemed like the case listening to Dedes’ call) is the scarlet letter for broadcasters, writers, and people in many other professions – a list that has become unfortunately too long over the past generation. And thanks to streaming media and social networking, there is now no margin for error. And no matter how sparkling someone’s resume can be, all it potentially takes is one miscue. It makes me appreciate the long-standing announcers and writers who have lasted generations without making that mistake.

With the two heads that just rolled at ESPN, I’m afraid attention will turn to Dedes in the coming days, and may end with anything ranging from an apology to suspension or even termination. Ironically, Knicks games are broadcast on New York’s ESPN Radio affiliate, but Spero is an employee of the New York Knicks, and not the WWL.

I have to be honest here, I never thought a line such as ‘Chink in the armor…’ would cause such a firestorm, although I find it incredible that people in three different platforms used the line in the space of 48 hours; is it a case of everyone desperate for a ‘clever’ line that’s going to get attention?

But would there have been a problem if, say, the following occurred…

Let’s say if after the Green Bay Packers playoff loss some broadcaster or writer had said the following: ‘After an incredible MVP season, Aaron Rodgers finally showed a chink in his armor…’

Until this weekend, the word ‘chink’ to me personally meant someone or something showing a subtle weakness. Definition #1 of the word in the dictionary refers to ‘chink’ as meaning a small sort of crack or opening. But a secondary definition of the word definitely refers to a derogatory slur directed at Asians.

Effective today, add ‘chink’ as a word that cannot be used on any forum in a journalism platform.

Pull up a video of highlights of the 1959 World Series and you will hear Vin Scully refer to Dodgers fans at the Los Angeles Coliseum attending Game 5 as the team was closing in on a championship as being in a ‘gay’ mood. That was two+ generations ago; in 1959 the word ‘gay’ referred to being in a joyous frame of mind. Now the word totally means something else and can be offensive to a specific demographic depending on context.

As times and contexts change, simple words that meant one thing for hundreds of years can mean something totally different. A high school being built even recently decided to back off on using ‘Cougars’ as a handle for their future athletic teams because now more people now think of the word to describe ‘sexy’ middle-aged women than a sleek cat prowling in the mountains.

As times change, words can evolve to mean derogatory things. 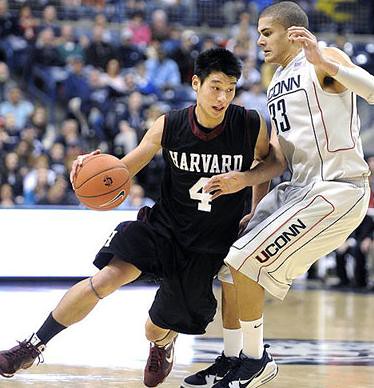 All of this, of course, takes away from the unprecedented Jeremy Lin storyline that has erupted the past fortnight. In fact, Lin represents what the NBA has desperately needed, a fresh face.

Pro basketball’s problem historically has been that it involves the same cast of characters. Kobe, LeBron, Kevin Garnett, Carmelo Anthony, etc., in many cases the NBA’s ‘BIG’ stars (as they refer to in their unoriginal marketing campaign) have been news items since they were in high school. Sure, new names get sprinkled in (Blake Griffin, Durant, Derrick Rose) but they get lumped with all the others before long.

The NBA has never had anything like Lin come along. At this time last year he was a typical fan favorite sitting at the end of the bench.

Personally, I just happen to like Lin period – I could not care less about race or even his Ivy League background. He even said on ESPN this weekend that he enjoys junk food and playing video games in his down time; how can anyone possibly be against that!!!!

And in the same interview he also suggested he has no interest whatsoever in getting in touch with any of the Kardashians — and I pray it stays that way).

In another news nugget buried under the racial firestorm, Lin is already being talked about as becoming the Knicks player representative, and eventually the head of the NBA Players Union.

AIso, I have had about enough of the racial stereotyping period. I would like to think that the NBA has become diverse enough to be WAY past this. We went through this nonsense with Jordy Nelson on the Packers this year, that the opposition supposedly still doesn’t respect his speed because he happens to be Caucasian. OK, he burns the Pittsburgh Steelers on pro football’s biggest stage and then averages 18.5 yards a catch this year, and he’s still not getting respect out of ethnicity?

I think it is time to stop worrying about trying to pen the next cute headline and appreciate Jeremy Lin for becoming one of the best stories to come around in any pro sport in quite some time. As a fan, I care much more about chemistry, numbers, wins, and the colors on his team’s uniforms than anyone’s race.

Because I’m a giant dork, this is my favorite image from NFL Week 13: when Broncos wide receiver Matt Willis was photographed standing next to running back Willis McGahee.