The 15-1 Green Bay Packers (who peaked in September-November)  have indeed been exited from the NFL Playoffs by the New York Giants (who are peaking now), and Hakeem Nicks was indeed wide open on an end-of-half Hail Mary.

So much for the Green Bay dynasty; as former GM Ron Wolf would say, the 2011 Packers proved to be just a fart in the wind.

The silver lining is that I personally do not have to deal with torn allegiances next weekend. You see, I jumped on the San Francisco 49ers bandwagon during the Bill Walsh/Joe Montana era – yes, people tend to jump on bandwagons of franchises that get good. During the 1990’s/early 2000’s I watched with mixed emotions as the Packers/49ers met four times in the NFC playoffs, with the Niners only win coming in the 1998 Wild Card Game now also known as ‘The Catch II’ and also ‘Jerry Rice Fumbled’.

I was hoping that the Packers and Niners would renew their playoff history at Lambeau Field this Sunday night, but that is not the case. Instead, the venerable post-season version of Candlestick Park, dressed up with painted end zones and number markers outlined in red, makes an encore appearance following the Instant Classic win Saturday over the New Orleans Saints.

It has been too long since the Giants and 49ers last met in another memorable playoff encounter following the 2002 season.

The NFC Championship also features Eli Manning and Alex Smith, the number one overall picks of the 2004 and 2005 NFL Draft. Both QB’s have taken separate and somewhat bumpy roads to get to this game.

It is amazing to think that Eli actually just celebrated his 31st birthday, as his career still seems to be on an upswing. He also is just two wins away from collecting a second Super Bowl trophy and one-upping his older, more-publicized brother.

To be honest, I have not been totally on the Eli Manning train based on the events leading up to the 2004 NFL Draft. As many remember, that was the draft of Eli, Philip Rivers, and Ben Roethlisberger, and all three have all gone on to enormous success in the league. 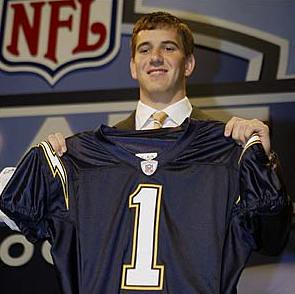 Eli was projected to be the #1 overall pick by the San Diego Chargers until Eli (backed by Archie/Peyton) announced that he would not play for San Diego if selected. That led to an awkward scene where Eli was selected by the Chargers and posed with a Chargers jersey on the podium before being dealt to the New York Giants for Philip Rivers (and two draft picks) less than an hour later.

As a Chargers fan, I lost some respect for the Manning family during this process. Truth is, there were legitimate reasons for the Manning camp to go in that direction that are now validated. First, there is the Chargers front office, which was a mess then and is a mess now. Also, the Mannings weren’t nuts about potentially being both be in the same conference, where they would had faced each other more often and possibly in the playoffs.

Rivers has done well in his career, though to little fault of his own he has been unable to collect the Super Bowl hardware that Eli owns. By ending up in New York, Eli Manning put himself under much more scrutiny than he ever would have in the 6-1-9 area code – no doubt Eli threw himself into the fire of the New York fan base and media.

Eli was not the instant success his brother was in Indianapolis. In his rookie year Eli completed less than 50 percent of his passes. Eli did not have a QB rating over 80 or a completion percentage over 60 until the 2008 season, one year after leading the Giants to their Super Bowl 42 victory. 2011 has become the year where Eli has become Elite, passing for 4,933 yards – normally a mammoth total except in a year when Drew Brees, Tom Brady, and Matthew Stafford all went over the 5,000 yard mark and Aaron Rodgers recorded a record QB rating of 122.5.

Safe to say Eli continues to trend upward while another New York-based QB continues to regress (my lips are sealed but his name is Mark Sanchez). And I have to admit to being wrong in holding Eli’s strategic maneuvering away from the Chargers in ’04 against him. In fact I admire the way Eli has rolled his own way and has taken a different path to stardom than his brother. The Giants are traditionally much more of a balanced offense than Peyton Manning’s Colts. It has taken time for Eli to be given the offensive weapons (Hakeem Nicks/Victor Cruz). In time the Giants became as feared offensively through the air as on the ground.

And now Eli owns two playoff wins in Lambeau Field, and this one cannot be blamed on Brett Favre.

Long before Tim Tebow, Alex Smith was the master of running Urban Meyer’s offense in leading the University of Utah to an undefeated season in 2004, throwing 32 TD’s versus just four interceptions. Along with Aaron Rodgers, Smith was considered the best QB prospect in the 2005 draft. Alex eventually emerged as the safer pick as the #1 overall selection over the player who was just across the Bay at Cal-Berkeley. Rodgers was thought of as an unfinished prospect who may not develop more. In fact, Rodgers was just a few years removed from not being recruited AT ALL out of high school. Meanwhile Smith excelled in the pre-draft process with above-average speed (4.7) and scored 40 on the Wonderlic exam. 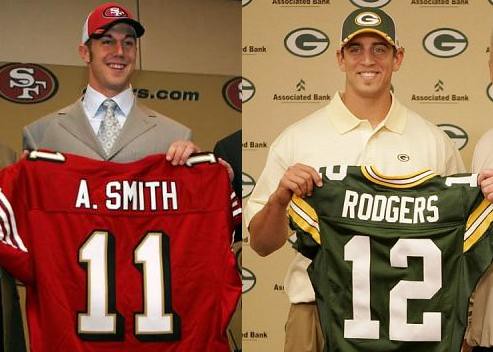 Alex Smith ultimately became the first pick of the ’05 Draft while Aaron Rodgers’ stock slipped to the point where the debate became whether he or Jason Campbell should be the second QB selected. Rodgers fell all the way to the Packers 25th overall pick while Campbell was selected by the Washington Redskins at #26.

Until this season, Smith was linked more with infamous draft failures such as JaMarcus Russell and Ryan Leaf. In his third season (2007), Alex’s completion percentage regressed below the 50 percent level. Eventually Smith wound up battling Shaun Hill (2008-09) and Troy Smith (2010) for the starting job and was no longer being looked at as the Niners’ long-term answer.

It was not until Jim Harbaugh’s arrival this year when Smith finally found his comfort zone and the franchise in general turned its fortunes around with a 13-3 season and first playoff appearance in nine years. Still, Alex could not escape the comparisons to Aaron Rodgers and his MVP/record-breaking season in Green Bay.  Alex finished ninth this year in QB rating, above such names as Ben Roethlisberger and Philip Rivers. However Smith finished with much less gaudy volume numbers, throwing only 445 times (to Eli Manning’s 589, for comparison).

Vindication came in the divisional playoff game versus New Orleans. Much of the game was not pretty, and Michael Crabtree dropping several passes didn’t help. But all that will be remembered from that game now is the final three minutes in the dwindling twilight at Candlestick, about the same time of day where Montana to Dwight Clark  struck three decades ago.

First came Alex’s bootleg to put San Fran up 29-28, and then the winning TD strike to Vernon Davis with :09 left, eerily similar to Steve Young to Terrell Owens to the same end zone 13 years earlier.

Ultimately, Alex Smith had proven himself clutch in a high-stress situation much like Joe Montana and Young had done a generation earlier.

So Alex Smith finally gets one over Aaron Rodgers; he will be playing this weekend – while Aaron will have to live on in endless State Farm spots.

But a fellow member of the #1 overall fraternity will be waiting on the opposing sideline this weekend.

And one will get to Super Bowl 46, but only one…

I won’t waste much time setting this up, because I don’t want to kill the punchline; you simply have to watch it.