To see all the category page for this series, of which there will be one for every franchise, click here.

Always the bridesmaid, never the bride – at least recently. (Never mind that no Maid of Honor could ever possibly look bad in purple and black with some gold thrown in, but I digress…)

Just merely getting deep into the playoffs has gotten old quickly for the Baltimore Ravens, whose Super Bowl 35 win now seems like a lifetime ago – and whose close loss in the recent AFC Title Game in New England is just the most recent and painful in the franchise’s attempts to get back to the big game, let alone win it.

The truth is, the Ravens have had a pretty good run in their 16 years of ‘existence’.  The franchise is 140-115-1 all-time, 124-84 since the 1999 season. Since 2001, the Ravens’ biggest problem has been simply their location in the American Football Conference. Except for the Raiders 2002 AFC title, the rest of the conference’s Super Bowl appearances have been scarfed up by the New England Patriots (5 times), the division rival Pittsburgh Steelers (3 times), and the Indianapolis Colts (2 times).  During the same period of time the NFC has seen the likes of the Tampa Bay Buccaneers, Carolina Panthers, Arizona Cardinals, and Seattle Seahawks all manage to sneak into the Super Bowl.

It is well-known that the franchise lived as the Cleveland Browns prior to 1996, but as part of Art Modell’s controversial deal to move the team east, the franchise had to basically go Witness Protection and leave its previous identity behind. As a result, all-time Cleveland records remain with the current Browns franchise.  It is an unprecedented arrangement not used with any other relocated NFL franchise, including the Cardinals, Rams, or Colts (although in hindsight the Colts franchise should have sought a new identity after moving to Indianapolis). Thus, for our purposes, Cleveland Browns records remain with the current Cleveland franchise and will be used to eventually determine the Browns Ultimate Franchise Player.

It should also be noted that the Ravens’ Ring of Honor is dedicated to all Baltimore football legends, including the Ravens and the Baltimore Colts.

There is a fantastic and diverse selection of candidates to choose from for Ultimate Franchise Player despite the relatively brief history of the franchise. Maybe not so much at the so-called skill positions, but the O-line and the defense, in particular, are well represented.

One trend you will notice: this team drafts incredibly well, especially in the first round.

So who joins Larry Fitzgerald and Deion Sanders as the third automatic qualifier in MSF’s eventual 64-player UFP field? One player soars above the field, figuratively and literally, blowing up entire planets in his wake.

The Ravens do not have a great QB lineage.

The top-ten ascending up to #2 reads as follows: Jim Harbaugh, Jeff Blake, Eric Zeier, Anthony Wright, Elvis Grbac, Tony Banks, Steve McNair (who did lead the team to a 13-3 regular season record in ’06), Vinny Testeverde, and finally Kyle Boller, who believe it or not is #2. That did not leave too high a bar for Flacco to clear, and he is by far the franchise’s best quarterback ever with 80 TD passes over just 46 interceptions in his four-year career.

Flacco will continue to take flack until he becomes elite and leads his team to a Super Bowl, but the current version isn’t too bad in his still young career. 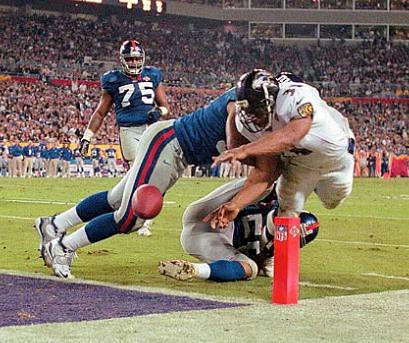 If you are looking for the best single-season ever by any Ravens player, look no further than Jamal’s 2003 season in which he rushed for 2,066 yards (one of six ever to go over 2,000 in a single season), including 295 in one game (still #2 on that all-time list). The only knock I can put on that season is that Jamal did nearly one-quarter of his damage on one team, with exactly 500 yards in two games v. the Browns.

In all, Jamal went over the 1,000 yard rushing mark in seven of his nine years in the league, including the ’07 and ’08 seasons with the Browns.

More fun facts on Jamal: he’s been out of the game a couple years now but is still just age 32; he was 21 when he rushed for 100 yards in Super Bowl XXXV;  and Jamal ranks #380 on Pro-Football-References Elo-Rater, checking in just ahead of Ahman Green.

You may not even know Heap is still in the league, but he caught 24 balls for the Arizona Cardinals this year. Heap’s career in Baltimore reached its apex in 2005-06, when he caught 75 and 73 passes. He also has a nice career mark of 11.8 yards per reception, which is excellent for a tight end. Where Heap falls short is that he never had an elite 100-catch type season and never caught more than seven TD’s in a campaign.

A lot of people no doubt wish he was still on the Ravens payroll for the AFC Championship. In all, Stover played 18 years for the Browns/Ravens, and rightfully is enshrined in the Ravens’ Ring of Honor. For his career Stover was 83.7% on his field goal attempts.

Although he played the vast majority of his career in Denver, Sharpe gets mention here since he was a valuable part of the Super Bowl 35 winning team. Sharpe accounted for 810 and 811 receiving yards in his two years in Baltimore.

Thomas became one of the leagues most sought after free agents following the 2006 season after recording 28 sacks in his final three years as a Raven.  He actually earned his first Pro Bowl bid in 2003 as a special teams player, recording 23 tackles in that role. Thomas’s performance fell significantly after signing a 5-year/$35 million contract with the New England Patriots in 2007.

Yet another first-round draft pick the Ravens cashed in on after a rare bad season, Ngata was the 12th overall pick of the 2006 Draft. He overcame personal obstacles on his way to the pros, losing both of his parents during his time at the University of Oregon.  At 6’4”, 350 lbs, the former rugby player has become one of the best at his position in the NFL, earning Pro Bowl bids in each of the past three seasons.

As was the case with Pat Tillman in my Arizona Cardinals installment of the UFP, Brigance gets a special place in his franchise’s history in the courage wing.

He played 14 years in all of pro football, including with the Baltimore Stallions’ 1995 Canadian Football League championship squad and the Ravens 2000 Super Bowl team, the latter of which was part of a seven-year NFL career.

Since retiring from football, Brigance has worked in the Ravens front office and has been bravely battling Lou Gehrig’s Disease (ALS) for the past several years, a disease so horrible I wouldn’t even wish it on Jerry Sandusky.

Like Shannon Sharpe, Woodson’s Hall Of Fame career is more synonymous with another organization (Steelers), but Woodson was still an elite player in Baltimore, intercepting 20 passes in four seasons and earning two Pro-Bowl selections.

Unfortunately he had his legal troubles since leaving football a couple years back, as it’s been reported that he spent lavishly during his playing career. McAlister was yet another high first-round draft pick that had a great career in Baltimore, being selected tenth overall in ’99. During the pre-draft process McAlister ran a 4.53 40-yard dash and recorded a 38-inch vertical leap.

McAlister was a two-time All-Pro in his time with the team and once returned a missed field goal 107 yards for a TD.

Still holds the franchise record with 15 sacks in 2001, and he recorded 70 sacks for his career. Yet another draft pick that worked out for the Ravens in the late 1990’s that provided the nucleus for the 2000’s Baltimore teams. Boulware went into politics after football and now serves for the Florida Board of Education.

This is contingent on Rice remaining with the Ravens, as his contract is up for the 2012 off-season, but all signs point to Rice staying put. Although the majority of his career remains unwritten, 5,885 combined yards in the past three seasons rank amongst the best in league history, and it was accomplished before turning age 25.

On the downside, except for a 159-yard rushing day in a Wild Card win in New England a couple years back, Rice has ran into tough sledding in the playoffs. 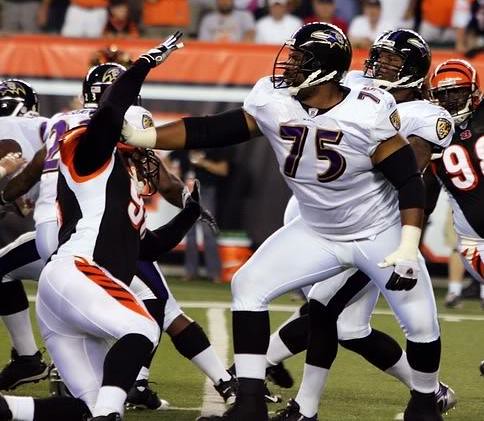 At 6’9” 345 lbs, Ogden was simply one of the most imposing physical specimens in NFL history. With the exception of his rookie year, Ogden was a fixture at the Pro Bowl for the following 11 seasons, earning All-Pro recognition nine times.

Another first-round draft choice the Ravens do not regret, he slid to #10 in the 2003 Draft as other teams were scared off by a slow 40-yard time. Suggs has move than overcome that perceived black mark on his resume, recording 82.5 sacks in his nine year career thus far.

57 interceptions over ten years. A three-time league leader in passes intercepted. He has returned INT’s back 106 and 107 yards for scores in his career. One of the best center-fielders ever to man his position in the NFL.

Reed is ranked #44 by Pro-Football-Reference, but only 88th on the NFL Network’s Top 100 list, which aired during the 2010 season. Reed is going to be square on the fence in regards to earning an at-large bid for MSF’s Ultimate Franchise Player tourney.

Between Reed and Ray, the Ravens have plenty to thank the University of Miami for.

Lewis is simply the Brett Favre of his era on the defensive side of the ball, and he ranks right up with Cal Ripken and Johnny Unitas as Baltimore’s greatest athlete ever.

I could rattle off stats all day, but I’ll just mention the one noted during the telecast of the 2012 Pro Bowl: Ray is the only player in the last three decades to record 40+ sacks and 30+ interceptions in a career.

Lewis is fully expected to return for a 17th season, and why not? There is still plenty left in the tank, and Lewis remains as intense as anyone on the field.

AND THE BALTIMORE RAVENS’ ULTIMATE FRANCHISE PLAYER IS…

Ray Lewis is ranked 18th on the NFL Network’s Top 100 list and probably goes up a couple of more notches based on his continued play over the past couple of seasons.

Although I do not heavily weigh character in my selection of UFP’s, the murder rap that Lewis faced following a party after Super Bowl 34 in Atlanta still must be mentioned. Lewis was eventually cleared of the murder chargers, but he was convicted of obstruction of justice. Ultimately, the other co-defendants in the case were also eventually cleared. As far as Lewis is concerned, give him credit for steering clear of trouble in the 12 years since.

Ultimately I will not hold this case against Ray Lewis, but I have to bring it up since my next installment of UFP (Arizona, Atlanta, Baltimore, you know who’s next in alphabetical order…) will involve a much more controversial case. 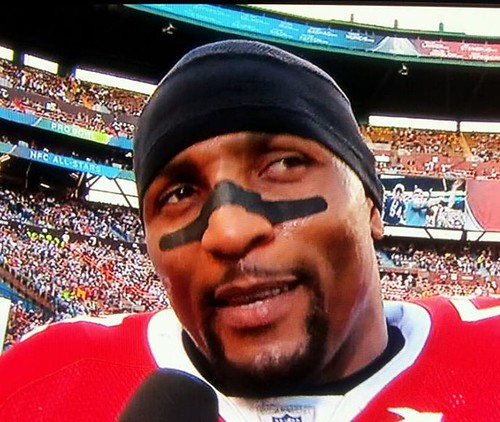