To see all the posts in this series, of which there will be one for every franchise, click here.

During the mid-1960s, the city of Atlanta had become fertile ground for professional sports franchises. A new multi-purpose stadium was going up, and the city had already become successful in getting a Major League Baseball team to move to the Deep South for the first time.

Football would be next.

NBC had just inked a contract to air American Football League games but was not happy about the Denver market being one of the franchises. The Broncos were the weakest link at the time and the network suggested the franchise would be better served in the Atlanta market.

With the AFL-NFL merger agreement that came a couple years later, all of this was basically a moot point except that Atlanta became an NFC member as opposed to AFC.

What followed was a generation of mostly below-average football. It has only been recently that the Falcons have enjoyed any sustained success on the field. The Falcons have earned playoff berths in six of the past 14 seasons, but the 2008-11 mini-era under Mike Smith marks the first time Atlanta had done as much as record consecutive winning seasons.

The lack of success is evident in the fact that only one Falcons player who played a significant portion of his career in Atlanta is enshrined in the Pro Football Hall of Fame. Eric Dickerson and Tommy McDonald both made cameos in the A-T-L at the end of their careers, and there was a rookie quarterback who held a clipboard for Jerry Glanville in 1991 who will soon be in Canton, but he too spent virtually his entire career in other locales.

So there isn’t a particularly deep field to choose from in selecting the Atlanta Falcons’ representative for pro football’s Ultimate Franchise Player, but there is that one Hall of Famer who does stand out and should represent well. 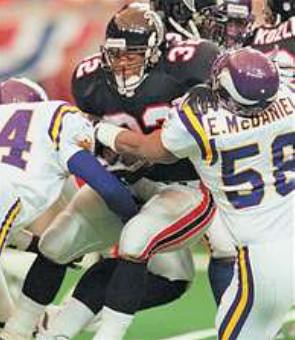 Had the best season of any Falcons running back ever, rushing for 1,846 yards and 14 TDs in the A-T-L’s lone Super Bowl year of 1998. Jamal had 410 attempts that year, and then he blew out his knee early the following season, becoming one of the prime reasons the total touches of running backs are more closely monitored today.

Jamal would go on to play one more full season in 2000 but had clearly lost a step by then.

During the 1990s I was involved in some fantasy leagues that included individual defensive players and Tuggle was always a favorite with his perennially high tackle totals.

For the entire decade of the 1990s Tuggle recorded nearly 1,300 tackles, a NFL high for the decade.

DeAngelo’s career has gone downhill since leaving Atlanta, but when he came into the league he was one of the fastest players in the game. He scored a touchdown via interception or fumble return in each of his four seasons with the Falcons.

Long before taking his pre-game motivational speeches to Dallas, this local product was selected 12th overall in the 1998 draft out of Georgia Tech. He was the rock of the Falcons defense for 11 seasons.

One of the leading tacklers in club history, Brooking was a five-time Pro Bowler and a two-time All-Pro selection during his tenure with the Falcons.

Then he moved onto Dallas, where he became more legendary for pregame moments like these than his declining play:

A.K.A Brock Middlebrook, ‘Bad Moon’ Rison was perfect for the Jerry Glanville era of the early ‘90. He caught 80+ passes in all five seasons with the team, also catching 56 TD passes during that time, including a league-leading 15 in 1993.

One of the greatest tight ends ever to play the game, Tony will likely be the second Falcon to spend more than a cup of coffee with the team to eventually be enshrined in Canton. He is ranked #121 on Pro-Football Refercence’s EloRater.  Check back for my Kansas City Chiefs edition of UFP; I have a feeling he will be right smack in the middle of that conversation.

He does have the title of most polarizing player in franchise history basically retired. He also has the distinction of becoming the first QB to rush for over 1,000 yards in a season, accomplishing that in his final Atlanta (pre-prison) season of 2006.

Even putting the off-field drama aside, Vick was never able to be a force as a passer in Atlanta like he has in Philadelphia.  Although he has completed 60%+ of his passes the last two seasons with the Eagles, Vick never got above 56.4% as a Falcon.

More known for his hard-hitting, Case led the league in interceptions with 10 in 1988. He finished his career winning a World Championship with the Cowboys in Super Bowl 30.

He has recorded 54.5 sacks in his Falcons career and 112 sacks overall, placing him 16th on the all-time list. His career high was 16.5 sacks recorded in the 2008 season.

Another local product from the state of Georgia, Andrews burst onto the scene with a 167-yard day in his NFL debut. By his second year, he helped lead the team to its first division championship with 1,764 yards from scrimmage. That would be the first of four consecutive Pro Bowl bids for Andrews, and he would go over 2,000 combined yards the following year.

A devastating knee injury sustained in the 1984 training camp proved to prematurely cut short his career, but he is still widely considered the best back in Atlanta history

Andrews misfortune in ’84 proved to be an opportunity for Gerald Riggs, who wound up rushing for 1,486, 1,719, and 1,327 yards in subsequent seasons. Iin all Riggs had 5,212 combined yards in those three seasons and wound up with 8,188 yards in ten NFL seasons overall.

In his final season with the Washington Redskins, Riggs was utilized strictly as a goal-line back and scored 11 times in the regular season, and six more scores in the Skins’ Super Bowl winning run.

One of the most ‘noted’ warriors of the trenches, JVN was drafted in the 11th round in 1969, and he wound up playing his entire 18-year career in the A-T-L. A five-time Pro Bowl selection, Van Note was named to the franchise’s 25th anniversary team in 1991 and will no doubt wind up on the 50th anniversary team as well.

The third overall pick in the 1968 Draft, Humphrey did not disappoint as a pro, eventually compiling 126 ½ sacks in a 14-year career. Humphrey also recorded a team high 14 ½ sacks on the Philadelphia Eagles 1980 NFC Championship team. He also did a cameo on a Dukes of Hazzard episode.

After proving himself in a one-year stint with the World Football League, Alfred went on to play all nine NFL seasons in the A-T-L, highlighted by a 1,358 yard, 13 touchdown campaign in 1981.

One of the biggest workhorse backs currently in the league, Turner has rushed for nearly 5,300 yards in his first four years with the team. He is basically a one-dimensional back who’s not involved in the passing game, which keeps him out of final table consideration.

Named after professional wrestling legend Rowdy Roddy Piper, it’s hard to believe White has already been in the league seven years and compiled at least 1,153 yards in each of the last five seasons, including his last two seasons in which he went over the 100 catch barrier.

It was very hard differentiating between Kenn and fellow lineman Jeff Van Note from the top of his list. Kenn started all 251 games in which he was in uniform for the Falcons, making First Team All-Pro on three occasions. The Pro-Football-Reference EloRater has him checked in at #265. 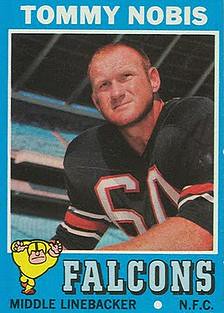 Still considered Mr. Falcon by many, he played his entire 11 years in Atlanta following a legendary career at the University of Texas. A member of the NFL’s All-60s team, Nobis once recorded a mind-boggling 296 tackles in a 14-game season.

The only reason Nobis didn’t get more pub during his era was being on a bad team and overshadowed by the likes of Dick Butkus, Ray Nitschke, and other iconic middle linebackers of that era.

You look at his past two years, and the numbers are actually pretty damn good, throwing 57 TD v. just 21 INT’s, which is an outstanding ratio. But winning a playoff game would enhance the entire body of work so much more.

The University of California actually has a very good lineage of QB’s all-time, including the likes of Bartkowski and Super Joe Roth, who unfortunately came down with terminal cancer during his senior season at Berkeley. They were followed by Rich Campbell, who wound up being a top-six overall pick (but a bust), and to more recent times and Aaron Rodgers (who worked out a bit better for the Packers than Campbell).

Bartkowski is still widely considered the Falcons’ best-ever quarterback, with his best years being 1980 and 1981 when he threw for 61 scores.

His successor at Florida St., Terrell Buckley, once brashly proclaimed himself as the modern-day Jim Thorpe. That title is much better suited for Prime Time, who was a cornerback, return man, wide receiver, and even moonlighted in baseball, playing for the Falcons and Braves on the same day (much to the chagrin of Tim McCarver).

Deion wound up playing for five different teams in his career, but he is best remembered as a Falcon and Dallas Cowboy, where he played five years for each.

I really had to give consideration to the likes of Nobis and Kenn, who played every snap of their careers in Atlanta. But in reality either one would serve as a bid thief in my eventual 64-player tournament.

Meanwhile Deion Sanders checked in at #34 on the NFL Network’s Top 100 countdown, and even though he spent much of his career elsewhere, he still remains today as the most iconic Falcon.

Therefore, my nomination as the Falcons’ Ultimate Franchise Player, and the second automatic bid into the UPF tournament, goes to… 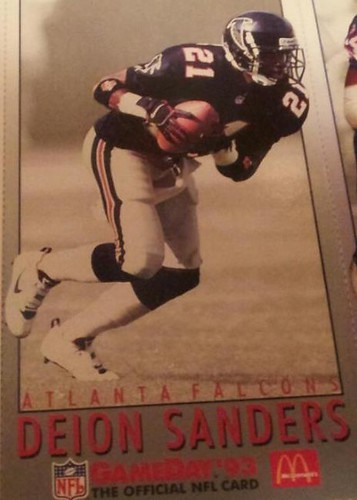