To see all the posts in this series, of which there will be one for every franchise, click here.

The roots of the Arizona Cardinals go back further than any National Football League franchise, being founded by Chicago’s Morgan Athletic Club in 1898 – having no idea that more then a century later the outfit would be playing in a retractable-roofed stadium in the middle of the Arizona desert.

The Cardinals got their handle in 1915 after being given maroon hand-me-downs from the University of Chicago that had faded significantly in color. The franchise took the Route 66 road to their eventual home over the space of several generations, starting at Chicago’s Comiskey Park from the early 1920’s through 1959 before relocating to St. Louis and eventually Arizona in 1988.

As charter members of the National Football League in 1920, there is obviously a lot of quantity to choose from for my first installment of the NFL’s Ultimate Franchise Player series. Unfortunately, the Cardinals franchise is perhaps one of the most perennially-losing outfits in the history of professional sports.

The Cardinals have only won two NFL titles in 90+ seasons: a disputed title in 1925 (pre title game era) and then in 1947. By far the Cards most recent success was catching lightning in a bottle following the 2008 regular season and nearly winning Super Bowl 43.

There is no member the NFL Network’s list of the Top 100 all-time NFL players (which aired in 2010) who played the majority of his career with the Cardinals. But someone from the all-time Cardinals roster will make history by being named the franchise’s ‘best ever’ and earning the first automatic bid to our eventual 64-player field to determine pro football’s Ultimate Franchise Player.

Yes, this is going to be far better than your typical 32-page, solicitation interrupted slideshow…

During their tenure in Chicago, the Cards were most relevant immediately following World War II. In a quest to win an NFL title (along with a Kentucky Derby), owner Charley Bidwell went out to acquire a ‘dream backfield’, two of the most prominent members being Trippi and Harder.

Trippi was the unofficial MVP of the 1947 NFL title game, scoring on a 44-yard run and 75-yard punt return on an icy field. Trippi is still alive today at age 90.

Also a legend in University of Wisconsin football history, Harder was the first NFL player to record over 100 points in three consecutive seasons, in part due to his contributions as place-kicker. Harder would later become a game official in the NFL.

One of pro football’s first African-American stars, Matson was a six-time All-Pro in his seven years with the team. Matson would go on to play 15 years in the NFL in all, and he was also a two-time track medalist at the 1952 Summer Olympics.

‘Jet Stream’ Green began his career on defense and tied a league record with a 106-yard kickoff return as a rookie. Not long after, Green moved to offense and would go on to average 19.9 yards per catch over a 12-year career, scoring 26 touchdowns in the 1983-84 seasons.

Not to be confused with the 1990’s Detroit Lions return specialist, Gray was a deep threat during the Don Coryall era in St. Louis. As a high-schooler in 1967, Gray ran the 100-yard dash in 9.4 seconds, a national record that would stand for 12 years.

One of the more dynamic return men of his era, Metcalf recorded 2,462 all-purpose yards in a 14-game season in 1975, a year in which St. Louis made the playoffs. Metcalf left the Cards after five seasons to take a money grab in the Canadian Football League before playing one final year with the Washington Redskins in 1981.

For over half of the team’s 28-year run in St. Louis, Jim Hart was the Cardinals’ QB. The peak of Hart’s career came in 1974-77, in which he was a Pro Bowl selection all four years.

Normally a quarterback with a 19-year career (Hart would play one final year as a backup with the Redskins) would have merited more run, but Hart’s career was more steady than spectacular, and he only had a career completion % of 51.1.

When thinking of 1970’s era QB’s, names like Griese, Staubach, Stabler, and Bradshaw (who all won championships) come to mind. Hart’s career rivals more of that of Ken Anderson or Joe Ferguson. 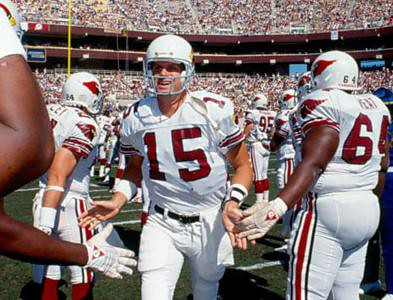 He first gained notoriety as a collegian putting up video game-like numbers in what would become known as the Run and Shoot offense at Division 2 Portland State.

A degenerative hip (that would eventually be replaced) short-circuited Lomax’s career after eight seasons.

The eighth overall draft pick out of the University of Miami, O.J. Anderson rushed for 193 yards in his first NFL game, and he would end up eclipsing 1,600 yards on the ground as a rookie. With the exception of the 1982 strike season,

Ottis would go over 1,000 yards in each of his first six seasons. Injuries curtailed Ottis’s productiveness, and was eventually released by the Cards in 1986. Anderson would have a career resurgence with the New York Giants, leading the team to its Super Bowl 25 victory.

In all, Ottis ended up with a 14-year career, much longer than your typical running back.

There has to be something about the Wilson handle and playing safety for the Cardinals. Through 2011 Adrian has earned Pro Bowl bids in five of the past six seasons. Steadiness more than numbers has propelled Wilson’s career.

He was possibly the best athlete of the 20th Century, period. Thorpe won the decathlon and pentathlon at the 1912 Summer Olympics, thought the medals were ultimately vacated (but reinstated in 1983) upon discovery that Thorpe had moonlighted playing semi-pro baseball. Thorpe wound up playing Major League Baseball, barnstormed with a basketball team, and played for many professional football teams, including the Cardinals and New York Giants.

Thorpe is a member of the NFL’s All-1920’s team and made his largest contributions in vastly increased gates on the teams he played on. Thorpe is ranked #37 on the NFL Network’s Top-100 countdown, and that may be a high enough RPI to get Thorpe eventually included in our 64-player tourney.

Undrafted and not satisfied with his job at an aircraft facility, Lane showed up at Los Angeles Rams training camp in 1952 and wound up intercepting 14 passes that season. Lane would split the final twelve years of his career between the Chicago Cardinals and Detroit Lions. 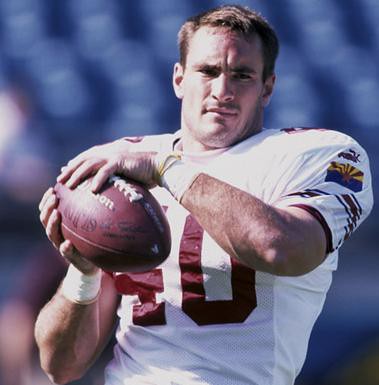 In 1999 Lane would  be ranked #19 in The Sporting News rank of all-time top pro football players, and the NFL Network’s countdown had him at #34. Again those are numbers that could be worthy of an eventual at-large selection – although Roger Goodell probably would not approve of Night Train’s head-high tackles under today’s rule package.

Pat Tillman holds a special place in the hearts of many, and since his passing on a battlefield in Afghanistan in 2004, some have called for his induction in the Pro Football Hall of Fame. It would not be the worst move the HOF selection committee could possibly make.

A standout on the football field, Tillman’s sacrifice to the game to serve in the United States military and eventually pay the ultimate price goes down as his lasting legacy.

Today, Dierdorf is more known as a broadcaster (in which he is also now in the Hall of Fame) than as a player. But as a mainstay lineman in the 1970s Dierdorf was money, being part of an offensive line that only allowed eight sacks in the entire 1975 season.

Dierdorf allowed a sack in a 1975 Divisional Playoff game, and did not allow another until Week 1 of the 1978 season. In all, Dierdorf was a five-time All-Pro selection.

The architect of what today is known as the safety blitz. Nicknamed ‘Wildcat’, the blitz became Wilson’s calling card early in his career and his signature. Wilson also was not bad dropping back in coverage, intercepting 52 passes in his career, at least one coming with casts on each arm from two broken wrists.

An eight-time All-Pro selection over a nine-year span from 1963-1971. Wilson remained with the organization from 1973-2002 in a variety of capacities, including scouting, personnel, VP/General Manager, and even a turn as interim head coach.

Crank up some more vintage 1970s NFL Films music. A standout at the University of Missouri, a pre-draft 40-yard timing of 4.5 vaulted Wehrli to the 19th overall pick in the 1969 NFL Draft, and like Wilson and Dierdorf, he played his entire career with the Cardinals.

According to division rival Roger Staubach, Wehrli originated the phrase ‘shutdown corner.’ For his career, Wehrli had 40 interceptions and 19 fumble recoveries and was a five-time All-Pro selection. He also served as the team’s holder.

Fitzgerald vaults up onto the short-list after one of his finest seasons yet, 1,411 receiving yards and a 17.6 yard average, nearly four yards above his career average. It’s absolutely scary what he could do if the Cards had a real quarterback – well just think back to the final quarter of Super Bowl 43 to get an idea.

With a good 4-5 years left in his career, Larry may very well cement his legacy as the Cards best ever player by 2015-16.

Of my final five, the previous four have played every down of their careers with the Cards, accounting for 48 years combined. Warner only wore red for five years, starting 57 regular season games, but it is during that time that Warner made the franchise relevant for one of the few times since moving to Arizona in 1988 and brought the team to within a whisper of a World Championship.

Warner is ranked #68 overall by Pro Football Reference’s Elo-Rater. Complicating Warner’s candidacy though is that he split his career between the Cards and Rams (and Giants), and is unlikely to earn a nomination as Rams best-ever player or an at-large selection into the 64-player field.

I couldn’t have possibly picked a tougher task for my first automatic bid.

Dierdorf, Wilson, and Wehrli were all franchise players I enjoyed watching growing up. Fitzgerald and Warner represent a more recent era, with Larry Fitzgerald on track to being a Hall of Fame receiver and Warner perhaps getting a call from Canton in as soon as three years time.

I’m going to hedge on future results as well as the past here.

My selection as the Cardinals’ Ultimate Franchise Player is… 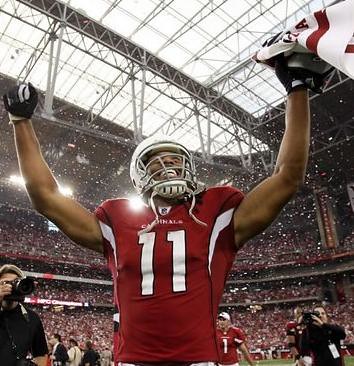 Stay tuned for the next installment of MSF’s Ultimate NFL Franchise Player Tournament.