Do not confuse Albert Pujols with LeBron James.

Albert wound up as a member of the St. Louis Cardinals for 11 years and helped lead his team to two World Championships, the most recent being just six weeks ago.

By comparison, Prince Fielder is likely walking away from the Milwaukee Brewers after the minimum six years.

And that’s not to even put Fielder in the same conversation as LeBron. Prince never half-assed it in any season while waiting to become a free agent. In fact, has Prince played in 959 of a possible 972 regular season games since 2006, a fact that agent Scott Bora$ is no doubt reminding potential suitors of.

But Pujols was on two World Champions in St. Louis, while Milwaukee’s ‘best’ to this point has been a couple of playoff appearances.

I get the bitterness in St. Louis. Albert was supposed to be the rare legend that goes old-school and plays an entire career in one market. Of course that tradition hit the rails long ago, and the handwriting that Pujols might leave has been on the wall ever since Pujols decided to play out the final year of his contract, which left open the possibility of the Cards being outbid by the dreaded ‘mystery team’.

You are welcome to hate on Pujols, but part of the onus also falls on the St. Louis organization, which was not able to lock up Pujols early on (2002-04) like the Brewers were able to do with Ryan Braun. The Cards added additional pieces (Chris Carpenter, Matt Holliday, etc.) to complement Pujols over the years, and STL wound up getting the maximum for their investments over the past decade. They just couldn’t agree with Pujols on the deal that would keep in St. Louis until he retires. 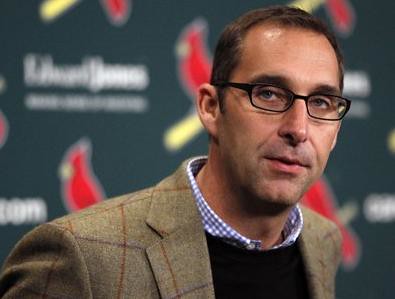 Tony LaRussa’s retirement possibly gave Pujols all the more reason to leave St. Louis as well. Now Cards GM John Mozeliak has to figure it all out, circa-1968 spectacles and all, and we will get to that in a second.

The Pujols contract may be an albatross in Anaheim come 2019 or so, but for now the Pujols signing sends a huge message that the Angels are definitely at the same level as the Yankees/Red Sox in the American League. The Angels are now also undisputed kings of the LA market – as the Dodgers’ idea of someone (other than Matt Kemp, of course) in middle of the order having a three-hit day is James Loney in his Maserati on the 101.

Then, the Angels signed pitcher C.J. Wilson (5 years/$77 million) away from the division rival Rangers. In hockey parlance, that is a ‘four-point’ game, a win for Anaheim and a loss for Texas. It also why the Rangers’ World Series loss stings just that much more – ‘window closing’ is quickly becoming ‘window closed’.

This leaves Prince Fielder as the next domino to fall in baseball’s Silly Season.

The logical idea is that if Pujols wouldn’t take $200 million+ from the Cards, then maybe Fielder will. Prince doesn’t hit for as high an average and isn’t nearly as good defensively, but he is four years younger and the power numbers are similar. The two sound like an easy enough match for me.

Personally, I’m not buying the reports of the Seattle Mariners being the front-runners on Prince. If that was indeed the case the Brewers better still be in the hunt, but they won’ bet.  It will be the Cards, or (less likely) the Cubs, or the ‘mystery team’ (Red Sox/Yankees, who trust me are laying low).

And that would leave the Brewers, as expected, as the biggest loser, possibly seeing Prince on a division rival.

The scary thought is names such as Carlos Pena (Mendoza Line and all) and Derrick Lee being mentioned as replacements. Casey Kotchman would be a much better option, as the defensive upgrade would make up some of losing Prince’s bat.

In another development, Francisco Rodriguez accepted arbitration from the Brewers. The good news is Milwaukee is set in the bullpen this year, but the bad news is K-Rod comes with a $13 million price tag – he could be yet a trade pawn before the off-season is over.

Most of the smaller and even mid-market teams will not be able to play at that table.

And then there is the splash the Miami White Sox (I meant Marlins) have made, spending $191 million on free agents just this week after spending $170 million in the previous 14 years combined.  But it’s coming at a cost, as the Marlins are trying to make a third baseman out of Hanley Ramirez to make room for Jose Reyes, but now Henley is reportedly balking at Ozzie Guillen.

But it’s obvious the Marlins are all-in. It’s a cycle that runs every ten years or so with a new stadium as the current centerpiece: buy a bunch of studs, become contenders for a year or two, go broke (as attendance plummets), then sell to the next shady owner while selling everyone off and re-developing the farm system.

Well at least they already have two World Championships in the last 15 years; the Mets and even Braves would have killed for at least one in that timeframe.

Or the Marlins and Miami Heat can join forces and start a baseketball league, considering the Marlins have already ripped off the Dealers uniforms. Projected batting order, 1. Reyes, 2. Hanley, 3. D-Wade, 4. LeBron, 5. Stanton, 6. Chris Bosh… I think that would get the Miami Dealers over the Milwaukee Beers.

So that takes care of the first wave of the baseball holiday shopping list. Expect more surprises in the Hot Stove Market, and don’t expect the Yankees/Red Sox to remain on the sidelines much longer.