Michael Jordan shakes off Craig Ehlo and Larry Nance. He receives a inbound pass from Brad Sellers. He quickly sprints left to the foul line. He centers himself, leaps and releases the ball over Ehlo extended arm.

That event is called The Shot and after The Decision happened it has been brought up more and more with other Cleveland tragedies. But I don’t believe the The Shot belongs on that list.

The Shot wasn’t that great of a moment, it just been hyped up because of the hundreds of times we have seen the replay.

There are two reasons why the replay is shown so often. One is that it was a great celebration and two is that Michael Jordan made the play.

The image of Jordan’s leaping fist pump as Craig Ehlo crumbles to the floor is a very remarkable one. Then Jordan throws more fist pumps when he lands on the ground. If Jordan does a more casual celebration we don’t see this clip as often.

And, of course, it was Michael Jordan taking that shot. The greatest basketball player ever. Its not like Jordan couldn’t get open and John Paxon hit the shot; if that had happened then no one would of remembered it.

Also there is this belief that it was Craig Ehlo’s fault that we lost that game. It wasn’t his fault at all. He had 24 points that game and he scored the go-ahead basket before Jordan’s shot, and he was playing on a sprained ankle.

It was Lenny Wilkens’ dumb coaching that lost us the game. Why would you put Craig Ehlo who had a bad ankle and who isn’t our best defender on Michael Jordan?

It would have made much more sense if he would have put Ron Harper on Jordan. Harper was our best perimeter defender and he had averaged two steals a game.

But it’s not like Cleveland would have won the NBA Finals; we probability wouldn’t have made it to the Finals anyways.

Cleveland had a good team that year. A GOOD team, but not a great team. The Bad Boy Pistons were a great team. We still should have beaten that Bulls team, which overachieved and went to the Eastern Conference Finals.

But let’s say that Jordan’s shot rimed out. The Cavs would have had to play the New York Knicks in the next round. The Knicks had a solid team that year. They had a young lineup, with all 5 starters under the age of 27, and they had a respectable record of 52-30.

Could the Cavs have beaten them? Yes. The Knicks had the best player on the floor in Patrick Ewing, but the Cavs had the next four best players: Brad Daugherty, Ron Harper, Larry Nance, and Mark Price.

Plus if that mediocre Bulls team beat them in six, the Cavs could have done the same. 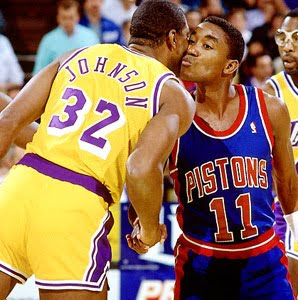 After that, the Cavs would have faced the Detroit Pistons, a Pistons team that won 63 games and eventually went on to win the NBA Finals. The 1988-1989 Detroit Pistons are considered one of the best teams in NBA history.

This Pistons didn’t have a dominant player pulling down huge numbers — Isiah Thomas lead the team in scoring and he only averaged 18 points per game — but they had nine players averaging at least seven points.

They controlled the boards, they had five dominating defenders (Thomas, Dumars, Laimbeer, Rodman, and Mahorn), and  they had a great coach, Chuck Daly, and most importantly they played like a team.

I still say that the Cavs would have lost this series, even though they went 3-3 during that regular season. But when Detroit acquired Mark Aquirre they went 3-1 vs. Cleveland.

But let’s say Cleveland beats Detroit; how would they have done against the Los Angeles Lakers? The Lakers won 57 games that year, the same total of wins as the Cavs. The Lakers were also 2-0 vs. the Cavs that year.

The Cavs could have won this series, but it would be a close six or seven game series. Cleveland had a better front court (Nance, Daugherty, and Hot Rod) but Cleveland would have had trouble containing Magic and Big Game James.

Versus Detroit, Worthy was the only player that averaged more then 12 points per game. The Lakers would have put up better numbers on Cleveland then they did versus Detroit, but not enough to win.

So Cleveland was good enough to beat Chicago, New York and the Lakers, but it wouldn’t have mattered because they would have lost to Detroit in the Eastern Conference Finals. This is why the Shot reminds me of the 1999 ALCS, when the Tribe was up 2-0 vs. Boston and the Sox came back and won the series.

That Indians team scored over 1000 runs, but their pitching was horrible. Plus it didn’t matter if we won because we were definitely losing to the Yankees in the next round. Same instance here as with the Cavs, who were better than Chicago — and we should have beaten them — but we were most likely going to lose to the Pistons later.

Unfortunately Gordon Gund effed up our future when he traded Ron Harper for Danny Ferry. Ferry was being called “The Next Larry Bird” but this “Larry Bird” couldn’t pass, rebound, play defense, go to the hole, or crack the starting lineup…all things the “Next Larry Bird” should be able to do.

Also Ferry didn’t just screw our chances to win a finals in the 90’s, he did it in the 00’s when sucked as a GM too.

The reason we traded Harper was Cleveland thought he was “hanging around the wrong crowd”, which really means Gordon Gund thought Harper was banging his daughter.

Harper was our best all around player. He played great defense, he was a great jumper, and he could drive to the hole which would give Price and Ehlo plenty of space to drain threes.

See, The Shot wasn’t that bad of travesty because we would have lost in the playoffs eventually. Regardless, thanks to LeBron James, there is a new basketball catastrophe to take that spot.